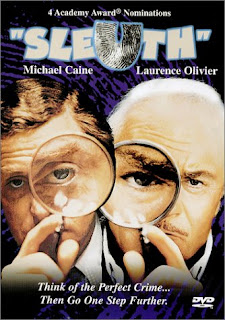 Directed by Joseph L. Mankiewicz.
Adapted from his own play by Anthony Shaffer.
Colour. 138 min.

One of the many beautiful things about this movie is that much of the obscurity in the original play has been removed on the screen. Indeed, if you prefer seeing plays, forget reading this one. Just see this 1972 adaptation, masterfully directed by Joseph Mankiewicz, with lavish sets and costumes that convey the Old-English-manor atmosphere to perfection.

Anthony Shaffer – much like his twin brother Peter with Amadeus – has actually improved his play in the process of adaptation. Some lacklustre lines are exchanged for brilliant ones; some superfluous stuff is cut; some scenes have become funnier, others more suspenseful. In short, this is the Streetcar-Leigh-Brando syndrome, only much aggravated: the movie has made the paper version perfectly obsolete.

There are many subtle changes in the movie, pretty much all of them improvements. For example, 's occupation is changed to hairdresser, which is more suitable both for his social humiliation and for his make-up tour de force. Many lines are changed to more effective ones. For instance, the final "Game, set and match!" has become the chilling wordplay "It was just a bloody game". Andrew's cheerful statement "There's nothing like a little bit of mayhem to cheer one up" or his quip on Milo's origins – "From to Georgian [architecture] in a single generation" - are entirely new and occur only in the script.

It should be said, however, that many memorable lines are retained on the screen either verbatim or with very minor changes. Couple of examples:

: It comes to the same thing
Andrew: Things mostly do, you know.

Andrew: It's a good thing, I am pretty much of an Olympic sexual athlete.
: Yes, I suppose these days you are concentrating more on the sprints than on the long distance stuff.
Andrew: Not so dear boy! I am in the peak of condition. I could copulate for at any distance.
: Well, as they say in the Olympics, it's not the winning, it's the taking part that counts.

Andrew: Suppose somebody saw you coming.
: Here? In the middle of nowhere? I could hardly find this place with a bloody map!
Andrew: You never know. A dallying couple, a passing sheep-rapist.

Andrew: Wit in the face of adversity! Good! You've learned something from the English.

Andrew: It's sex! Sex is the game! Marriage is the penalty.

Even the characters seem to have gained life on the screen. Or is this merely a "side effect" of the great acting? No, I don't think so. There is too much entirely new dialogue in the movie, all of it apposite. The contrast between Andrew and is emphasized, and to a great effect. Consider for example 's description of his life, far more forceful than in the play:

We are from different worlds, you and me, Andrew. In mine, there was no time for bright fancies and happy inventions, no stopping for tea. The only game we played was to survive, or go to the wall. If you didn't win, you just didn't finish. Loser, lose all. You probably don't understand that.

This is indeed an incredible movie. They really don't make them like that anymore. Trite but true. Which is this modern movie, released, say, in the last twenty years, where two actors can hold your attention, nay keep you on the edge of your chairs, for nearly 140 minutes during which the whole action takes place in a single house? And which is this recent movie in which you can enjoy such elaborate and meaningful, yet natural and hilarious, dialogue? None comes to mind.

Great acting doesn't get much better than that. The 65-years-old Laurence Olivier gives a fabulous performance as Andrew Wyke, full of subtle histrionics and robust mischief. He is often accused of ''hamming it up'', but only by people, one may be sure, who either have never seen the movie or are very keen on missing the point.

Olivier's range is in fact vast. The ham is there all right, and it's part and parcel of Andrew's fantastical character. But there are many lines delivered with calmness and restraint that carry deeper meaning than it seems at first glance. For example:

: So she's used to luxury. Whose fault is that?
ANDREW: It's not a fault if you can afford it. [Pause. Blandly.] But can you?

[about his Italian father]: His name was Tindolini. […] He wanted us to become English and changed it.
ANDREW [casually]: Become English.

The square brackets and the emphasis are mine, and though they are no substitute for seeing and hearing the original, they accurately reflect the performances in the movie. These two minor examples speak volumes. With a slight pause combined with a changed voice and with a casual repetition of a single word, Olivier conveys Andrew's snobbishness, social and national respectively, as no amount of pertinent dialogue could.

Michael Caine as all but overshadows his legendary colleague – quite an achievement indeed. Many scenes – notably the charade with the costumes and the denouement – are deliciously over-the-top and far more exciting than on paper. Caine's range is every bit as staggering as Olivier's. It spans from the faint embarrassment in the beginning to the pathos on the stairs to the confidence of the winner towards the end. The clownish stunt is hilarious, the dramatic reversal of the roles perfectly executed.

On the whole the movie is remarkably dynamic, yet the dialogue has not in the least been oversimplified or in any other way weakened as so often happens when sophisticated plays are adapted for the screen. The essence of the original – on the surface a crime mystery, but actually a disturbing study of human humiliation, prejudice and greed – is completely preserved. It's an amusing yet chilling spectacle, vastly superior to the run-of-the-mill whodunit.

One of most perfect movies ever made. A genuine masterpiece.

PS on the DVD edition.
Because some reviewers are silly enough to complain about the lack of extras. Well, my copy is a Spanish release (La Huella) with no extras whatsoever. Who cares about extras anyway? It is seldom that they contain something really worth seeing. What you usually get – instead of the further insight you hope for – is tedious retelling of what you've already seen and a bunch of tiresome clichés. The really important thing is that the picture (1,66:1) and the sound (ordinary stereo) are excellent: the colours are vivid, every word of the all-important dialogue is clearly audible. 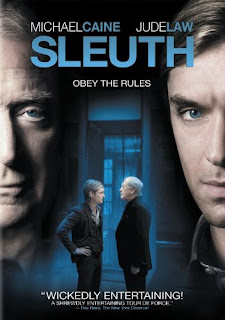 It's not really a remake as both movies have nothing in common but the basic plot; very few of the original lines have been retained. It is worth seeing mostly because Michael Caine now plays Andrew Wyke and because of the dashing Jude Law as Milo Tindle. Both are superb. Visually the movie is drab and futuristic, though not without certain charm.

The screenplay is the real problem. Harold Pinter has ruined completely the character of the original. The light-hearted yet pointed banter is exchanged for a heavy-handed dialogue full of nasty and bitter humour. The original and marvellously quirky characters are replaced by cruel caricatures. Mr Pinter commits at least two other grave crimes. He counts too much on foul language (a sure sign of artistic impotence) and he introduces unnecessary homosexual references (nowadays badly dated as well).

(To be fair, there is a slight hint of the homosexual stuff in the original play as well. Fortunately, Anthony Shaffer was wise enough not to elaborate on it. There are certain moments in the old movie when Andrew and do look like a pair of queens participating in a steamy seduction scene, but the reason for this is their passion for playing games, not any sexual attraction.)
The movie is directed by no other but Kenneth Branagh himself. Well, to be blunt, his direction is by turns misguidedly imaginative and tediously static. It is to Kеn's credit that, despite the short runtime, the movie feels much too long.

In short, misguided remake of a true classic. It has but two minor virtues. It bears little relation to the original, so at least there can be no accusations of copy-pasting. It runs for mere 89 minutes.
Posted by Alexander at 19:31