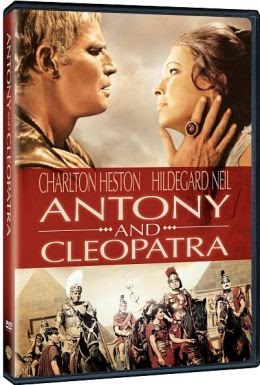 This is Charlton Heston's one-man show. Judah Ben-Hur is not just here, but director and co-screenwriter as well. It is a fine movie worth seeing multiple times. The rumour has it that it was a labour of love; and it shows. All the same, I’m not sure it has a place in the front rank of Shakespearean adaptations for the screen.

Visually, the movie is a splendid exotic extravaganza. Sets and costumes are lavish almost to the point of ostentation, there are plenty of breathtakingly spacious outdoor scenes, the battles are as epic as they come. In short, an honest attempt to outdo the Taylor-Burton epic with some 30 times smaller budget. The significant difference – the enormous difference – is that the earlier movie has nothing to do with Shakespeare. It uses completely different plot and dialogue. That’s why it’s better.

When it comes to modern adaptations of Shakespeare for the screen, there is a glaring contradiction that few movies manage to escape. The greatest glory of the Bard is not the action, the sets or the costumes. It is, of course, the language. Unfortunately, it is not a language that lends itself easily to visual treatment in the Hollywood-style. It is commendable to make Shakespeare’s plays more dynamic and visually appealing. The question is how to do this without losing an essential part of their greatness. Merciless abridgments, simplifications and re-arrangements are often excused with the idiotic argument that, had he lived today, Shakespeare would have done it himself. No doubt. He would have done it all right. And he would have been a lesser Shakespeare.

This adaptation is rather a mixed bag. It has some nice original touches, for example the first meeting between and Octavius is suggestively coupled with gladiatorial combat, the opening lines are put in Enobarbus' mouth, the role of Proculeius is greatly expanded, some minor characters are omitted, others are merged. There is very little additional or modernized dialogue (e.g. “the abstract of all faults” becomes “the sum of all faults”). Some scenes benefit from imaginative interpretation of the original, for example when overhears Enobarbus’ famous description of “The barge she sat in” or when the hapless messenger lies to Cleo about Octavia’s looks guided by the surreptitious hints of Alexas and Charmian. The drinking party on Pompey’s galley features a hilarious parody of Tony and Cleo. So far, so good. On the other hand, the cuts are more than substantial and much to disadvantage of both the poetry and the characters. For example, Cleo's sarcastic reference to the Roman messengers in the first scene is entirely missing, and so are the little episode with her treasurer in the last scene (always cut, alas) and Antony’s anguished speech after Actium (“I have fled myself”). Usually the cutting is much subtler than that; single lines and even words are omitted. But it’s there. Virtually all scenes are, if not ruthlessly butchered, at least to some extent de-Shakespearized.

(Speaking of cuts, one must be very careful because the movie seems to exist in several very different versions. I first saw some Spanish DVD which was only 123 minutes long, but later got hold of another version – 25 minutes longer! So the appalling cuts may not always be thanks to Heston and co. If IMDb is to be believed, the longest runtime of the movie is 160 minutes. But since the mecca of movie statistics does not mention the 123-minutes version, and I guarantee it exists, I am not sure it can be trusted. The shortest version is the butchery to end all butcheries indeed! It omits completely even the meeting between Cleo and Caesar at the end! Nowhere on the cover will you find even the slightest indication that this is an abridged version!)

I'm no great fan of Charlton Heston, but I like him well enough to appreciate his performance here. I don't know why reviewers often denounce him as hammy. Now and then, he is, of course, but Heston’s ham, like Olivier’s, is seldom applied without good reason. Besides, there is a good deal of ham (and some eggs as well) in , isn't there? I enjoy Heston's roaring "Let Rome in Tiber melt!", accompanied with his tearing a pearl necklace, and the generally macho he presents. No whining exercises of self-pity here. On the whole, Heston is consistent, convincing and sometimes even moving. In any case, he does a much better job than Hildegard Neil as Cleopatra. She alternates between vapid and histrionic moments, mechanically chanting her lines all the time, exuding not a trace of the sensual charm that must be part and parcel of Cleo. She reminds me, not of the Queen of Egypt, but of a spoiled schoolgirl. That she doesn’t look the part doesn’t help the matter, either. Not for a single minute am I convinced by her performance.

Easily the finest performance in the whole movie is Eric Porter's as Enobarbus. Brilliant. Simply brilliant. Porter escapes the trap that other actors readily fall into, namely making the character too buffoonish. Enobarbus is a man of the world, a man of no illusions about himself or the others, a witty and perceptive observer of human wisdom and folly. But he is no buffoon. As usual with this type of fellow, below the sarcastic surface there is deeper seriousness and compassion than usual. Actors who neglect this part of the character do, to my mind, a gross injustice to Enobarbus.

John Castle has been much praised by the mighty reviewers online, but his Octavius strikes me as too wooden; not a man, not even an actor playing a part, but a speaking mannequin. Among the supporting cast, a charming bonus is the young Jane Lapotaire as a much better Charmian than her Cleopatra a decade later, the very Roman-like Julian Glover, much better known as Walter Donovan from Indiana Jones and the Last Crusade (1989), as Proculeius, Roger Delgado as the most sinister soothsayer on screen, and quite a few handsome creatures of both sexes (Eros, Alexas, Iras, Octavia) or somewhere in between (Mardian). 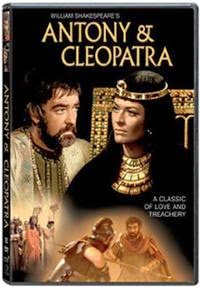 This one is the best of the bunch. By far. Based on Trevor Nunn's RSC production, it is filmed theatre, much like the BBC version but infinitely superior to it. The costumes are modest but evocative. Sets there are none, but the lightning is wonderfully atmospheric; it’s almost a character of its own, “beaten gold” for , bright and harsh white light for . The only minor defect, purely visually, is the rough editing, but though a bit weird, it is seldom annoying. Anyway, any Shakespearean movie/film/theatre production must stand or fall on the acting alone.

So far as I'm concerned, great Shakespearean acting doesn't get much better than this. Richard Johnson and Janet Suzman are very nearly perfect as Tony and Cleo. Both convey the complexity and the subtlety of the characters with stunning vividness and verisimilitude. Suzman is especially remarkable. She is hot, she is cold, she is dreamy, she is blunt, she is arrogant, vain, spoiled, charming, seductive, silly, commanding, vulnerable. She's everything – or nearly everything – Will's Cleo should be. She is the only one who, in the final scene, succeeds in conveying Cleo’s “immortal longings”. Incredible performance from start to finish. Compared to Suzman, Neil and Lapotaire are not in the same league at all. Johnson’s is quite different, much weaker and more pathetic, than Heston’s. To my mind, both interpretations are equally valid. Johnson wins because of his eloquent delivery of the nearly complete part. He keeps the histrionics to minimum and has a compelling rapport with Suzman in their joint scenes.

Patrick Stewart is a fine Enobarbus, but lightweight compared to Eric Porter. He has the advantage of much fuller text, but he doesn’t rise to any heights not already reached by his predecessor. Indeed, he seems off balance quite often; his death scene is unduly melodramatic, his witticisms lost in grinning. To be fair, it’s not all his fault; Nunn’s to blame, too. It is imaginative to stage “kill all our women” in alcoholic stupor, but I’m not sure it serves well the dramatic value of the text. Not to forget Octavius (the most often neglected major character in the play), Corin Redgrave gives a beautiful performance. That cold disdain, that implacable contempt for 's Alexandrian revels so characteristic of Octavius is given here its greatest expression on the screen. Just a twitch of the lips, dropping the corners, and there it is. He allows himself a tear or two at the news of Tony’s death, but it’s nothing like the ludicrous tear-jerker by Ian Charleson.

The supporting cast, except for the thoroughly mediocre Rosemary McHale (Charmian), is excellent. A very young and handsome Ben Kingsley as Thidias is a special bonus.


At about 2 hours and 40 minutes, this is a relatively uncut version. Relatively. The oddest missing link is Pompey: the poor guy is entirely erased. 'Tis a pity; it makes the drinking party much less effective. Otherwise, however, the dialogue does feel like Shakespeare, unlike Heston's version where it feels like pure and simple. Likewise, changes in the plot – save the vanishing of Pompey – are very minor. 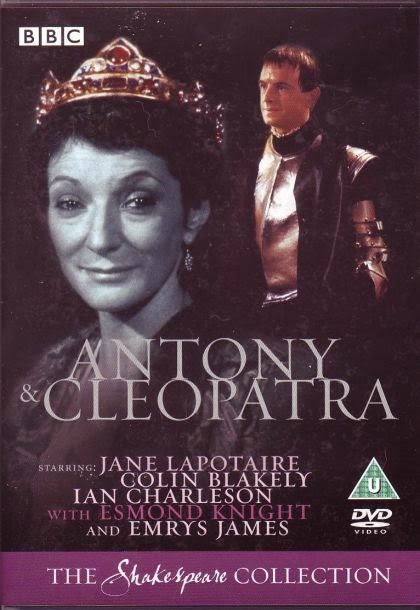 Well, I like the BBC production better than most, but, all the same, it is the worst of the bunch. Perhaps if I’d seen it first I might have found it more satisfying. Part of the problem is the production. The sets are passable, but the costumes are terrible. It’s hard to ignore them, and when Tony and Cleo are dressed in some sort of half-Elizabethan, half-modernist kitsch, it’s hard to take them seriously.

Blakely is not a bad , especially in his more robust moments towards the end where he manages to infuse the poetry with elemental passion without ruining it. He tries hard to make a coarse soldier and a volatile lover, but somehow it doesn’t work. This is not a performance I would rank with his superb in Lear (1983). Lapotaire also has fine moments, especially in the final scene with Octavius, but on the whole she makes Cleo just a little too whiny and too weepy for my taste. Worst of all, if there is any chemistry between the principals, I haven’t noticed it. The rest is even worse. Ian Charleson is an incredibly melodramatic Octavius, just a little short of character assassination. Emrys James is the dullest Enobarbus imaginable; he plays up the witty passages and tries to look serious in the dramatic ones, but in both cases he lacks Stewart’s authority. Janet Key makes Rosemary McHale look like the greatest Charmian ever.


Last but not least, cuts are few but always questionable. Why cutting half of Enobarbus’ short comment about the two chaps? The omitted part – “And throw between them all the food thou hast, / They'll grind the one the other” – complements the rest to perfection. It’s an absurd cut, quite unnecessary and harmful. It is always strange to me that the guys in the BBC, who were so adamant not to include one non-British actor in this series, should make such silly mistakes. Nevertheless, this is not a bad movie, certainly not as bad as reviews might lead you believe. It just came too late on the scene. I guess it remains a decent starting point.

Posted by Alexander at 21:37 No comments: 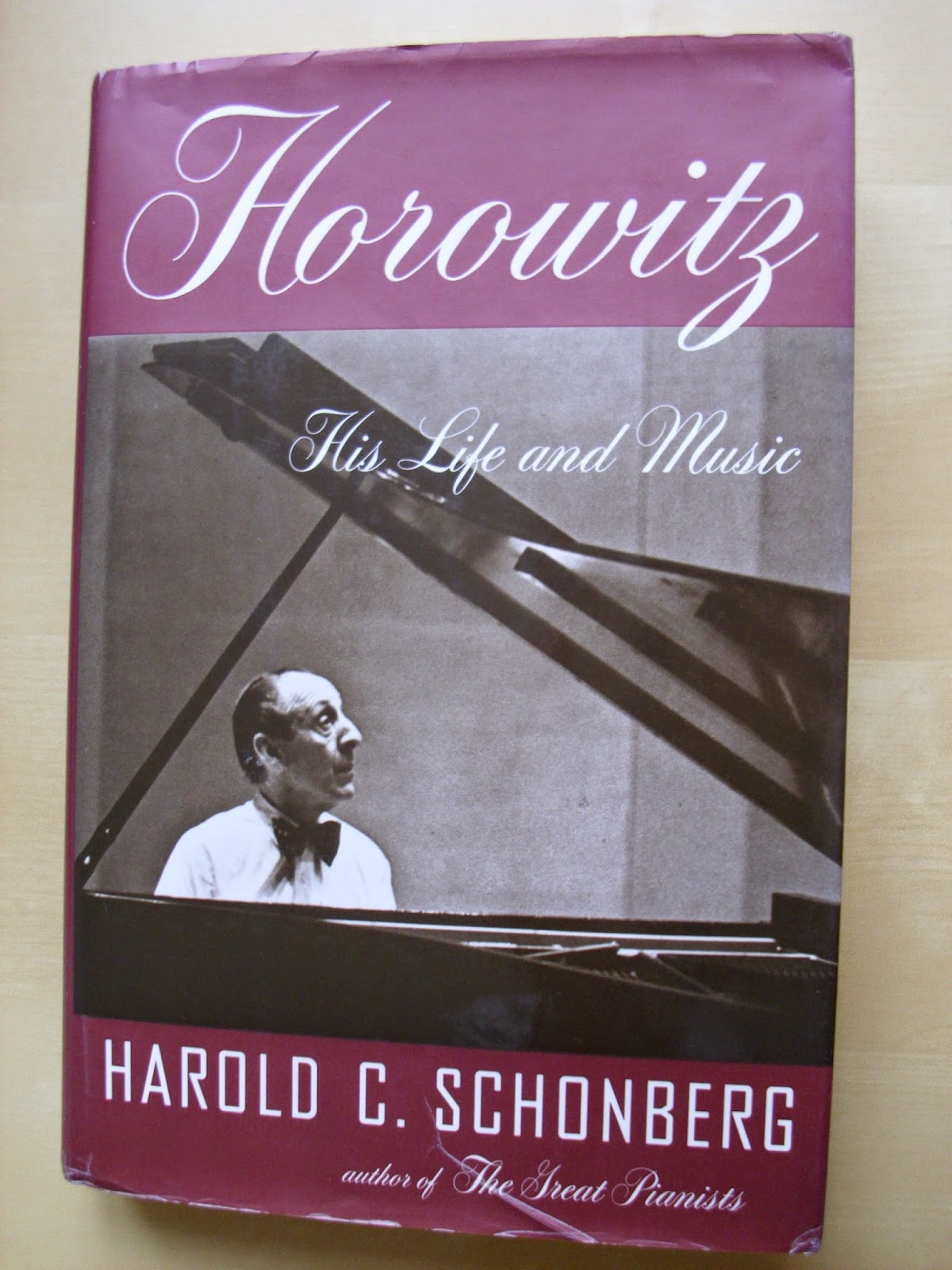