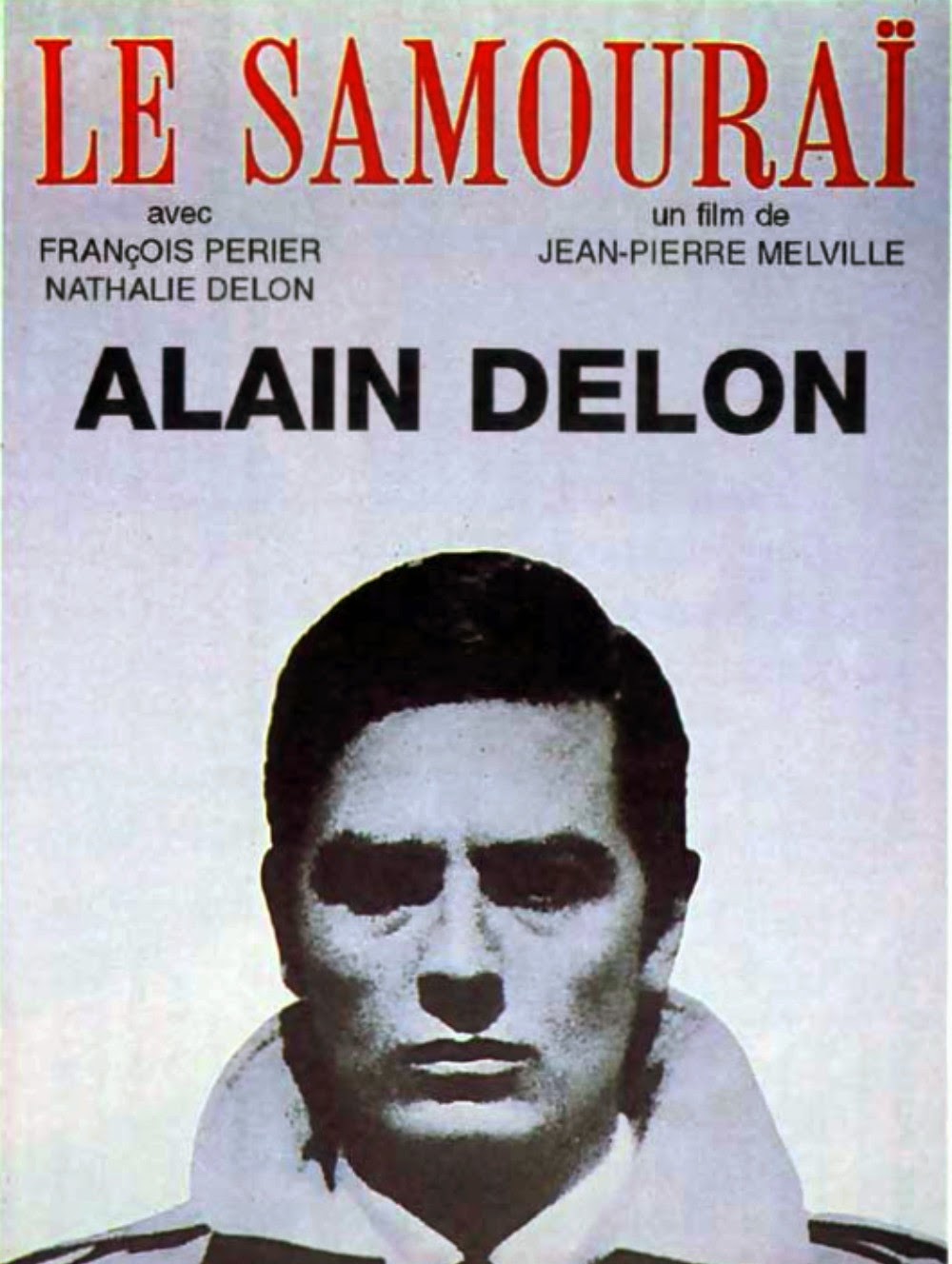 Screenplay by Jean-Pierre Melville & Georges Pellegrin, based on the novel The Ronin by Joan McLeod.

This is a very special movie, one of those exceptions that have unique character and atmosphere of their own. It has more than that. It has genuine greatness. It is very close to perfection, both as conception as well as execution, and it raises profound issues worthy of some contemplation. With the possible exception of Léon (1994), I can’t think of another movie that explores loneliness with such shattering vividness and portrays a hitman with such compassion. Killshot (2008) is a pretty good and rather underrated attempt, with a fine performance by Mickey Rourke, but it is nowhere near this level. The Day of the Jackal (1973) is a well-deserved classic, but its cold detachment puts it in an entirely different category. I don’t even want to mention trash like Pulp Fiction (1994), meandering as it does between cheesy dialogue and mediocre direction, a tale told by an idiot, going nowhere, meaning nothing.

What makes Le Samourai a unique movie, and that’s not putting it too strongly, is that it focuses on a single theme and develops it single-handedly. The pace is slow, the dialogue is sparse (not a word is spoken for the first nearly ten minutes), much of the story, a fine crime thriller on the surface, is told visually. Obviously you need a great director to pull this off. I know nothing about Jean-Pierre Melville and have never seen any of his other movies, but he does a fabulous job here. Just look at the haunting opening shot with Alain Delon lying on the bed and smoking in that dingy room, or the famous chase scene in the metro that builds great tension as if out of nothing, or just about any other moment: none is less than memorable. The camera is almost like an additional character, a sharp but never obtrusive narrator. It is all muted, low-key, restrained, hard-boiled, noir in every sense of the word, yet also intense, restless, brooding, passionate and tragic. Unfortunately, it’s indescribable. You have to see it for yourself. 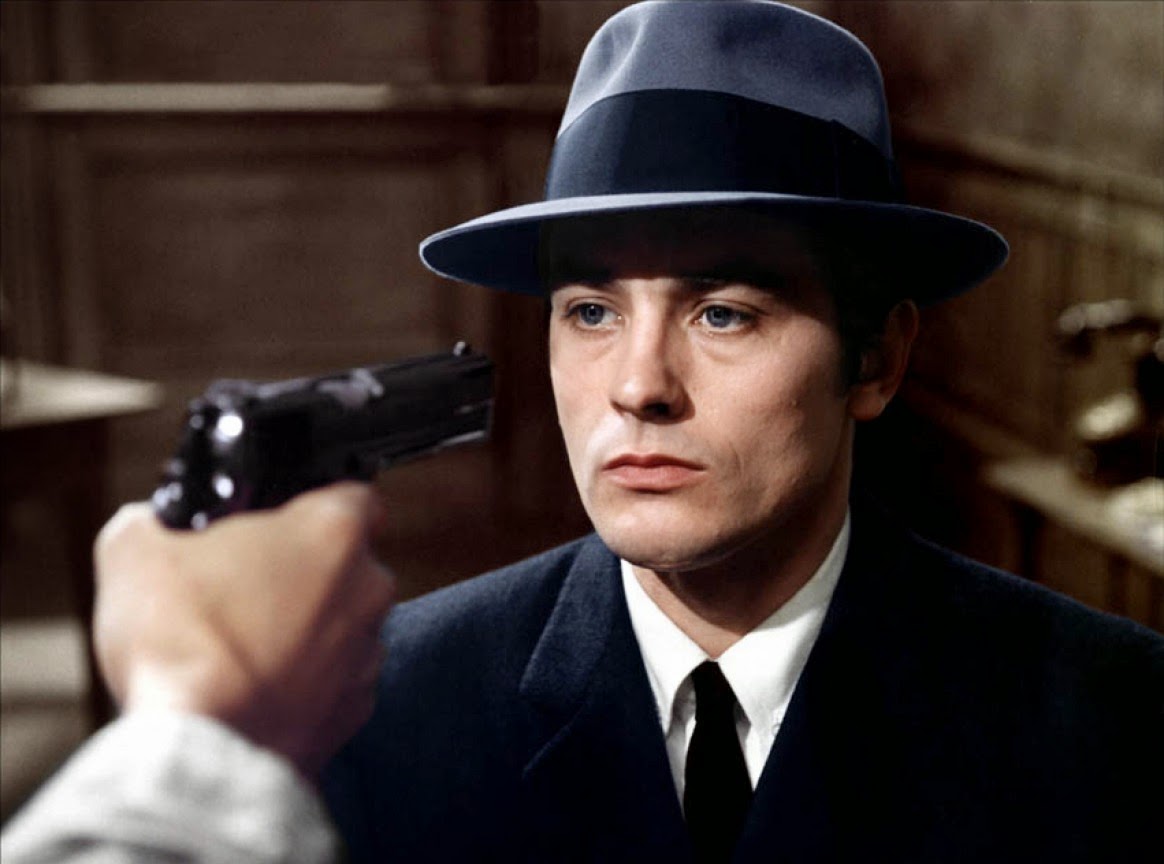 In spite of a genius in the catbird seat and a very fine supporting cast, it is Alain Delon who makes the movie. This is great acting that the silver screen has seldom seen. Not a hint of smile passes through his face through the whole movie, not for a single word does he raise his voice. Cool, collected and cold-blooded, he is the perfect embodiment of hired assassin. And yet, somehow, he manages to be human as well, to convey the estrangement behind the Wall and the inner emptiness that now and then affect all of us. We are all sentenced to solitary confinement inside our own skins, as Tennessee Williams once put it[1]. I have never seen a more forceful expression of these words than Alain Delon in Le Samourai. It is painful yet mesmerising to watch.
Spoilers ahead!

Like Melville’s direction, Delon’s performance is not realistic; it’s a huge mistake to search for realism in this movie. What both of them aim at – and ultimately, I think, achieve brilliantly – is realistic presentation of truth. This is the most art can do: present us to ourselves, tell us something about us that we ought to know. Le Samourai does that. The only fault I can think of is that Jef’s mental breakdown is too swift and not terribly convincing. (But compare his face while stealing both Citroens and the two scenes in the garage that follow. The second time he looks much more troubled, doesn’t he?) But that’s really falling in the same trap I’ve just warned about. Besides, it may be argued, though not very convincingly, that Jef’s madness has already started before the opening credits. Whatever defect this may or may not be, it is completely redeemed by the moving final scene that reveals as much as it conceals. It is tantalisingly open to various personal interpretations.

One thing is certain about the end: Jef commits suicide. Compare the final scene with the murder of Marty in the beginning. Revealing differences abound, and Melville makes sure we see them all. Jef’s behaviour in the end is highly untypical. He enters the night club and immediately draws attention to himself by leaving his hat at the wardrobe. He is given a number; but he doesn’t take it. He goes to the bar and there, almost like a stage magician who prepares his greatest trick, puts his white working gloves. He then proceeds to the lovely black pianist in the orchestra and threatens to shoot her from a very short distance. Why on earth would he go for such publicity stunt in the first place? He is bound to be caught and he knows it. Nor does he try, again in stark contrast with the beginning of the movie, to secure an alibi with Jane. So, he does kill himself, that much is clear. But why?

Some people have gone out of their way to speculate about Jef’s committing a ritual suicide in the manner of the samurai because he has dishonoured his (mysterious and never identified) master. This fits the title nicely, but I really don’t buy it. The movie does contain an epigraph from Bushido, the book of the samurai, but it mentions nothing about masters and suicides. Not even close. “There is no greater solitude than that of the samurai, unless it is that of the tiger in the jungle… perhaps…” This immediately sets the theme of isolation. The movie then proceeds to unfold a grand set of variations, almost exclusively in minor tonalities, that bring to mind Bach’s organ masterpieces. 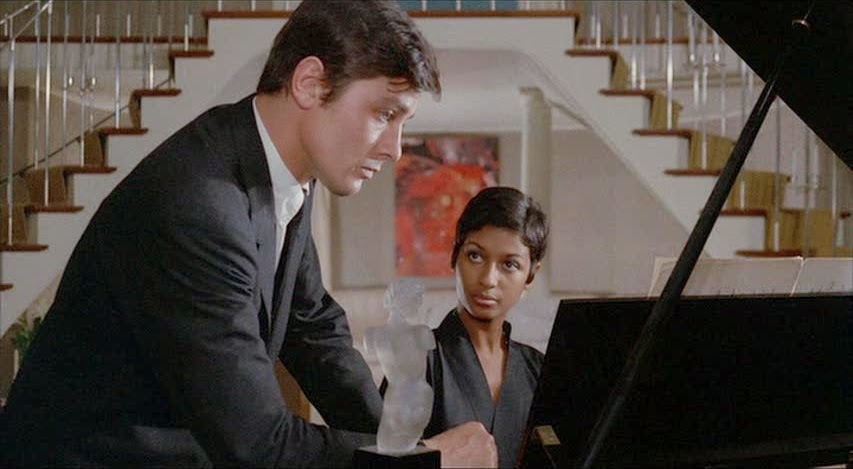 The reasons for Jef’s suicide remain elusive. For my part, I think he is just fed up with this kind of life and knows only too well he is incapable of changing it. It is too late. The few short scenes with Jane, his “alibi” (played by his wife at the time), are poignant pieces of evidence in support of this theory. She is quite fond of him, indeed in love with him, for she is ready to take enormous risks for his sake and she refuses the Commissaire’s subtle threats and not-so-subtle bribes. But his attitude to her is, at best, indifferent. It shows a man tired of this vapid existence that passes for “life”, perhaps at the verge of a momentous decision about it.

There are many other loose ends that the viewer has to tie up himself. The role of the pianist is especially prone to speculation. Does she have anything to do with Jef’s murder by the police? What are her relations with the people who commissioned him the murder of Marty? Why did she tell him to call her at 8:10 but then didn’t pick up the phone? Does he have some feelings for her? Do they play some role in his final degradation? Was he really paid to kill her or did he just tell her so? Was he paid by his master to commit a ritual suicide? Who could this master be? You tell me.


[1] Through the words of Val in his play Battle of Angels.

: Nobody ever gets to know anybody?
VAL: No. Don’t you see how it is? We’re all of us locked up tight inside our own bodies. Sentenced – you might say – to solitary confinement inside our own skins.
Posted by Alexander at 03:01