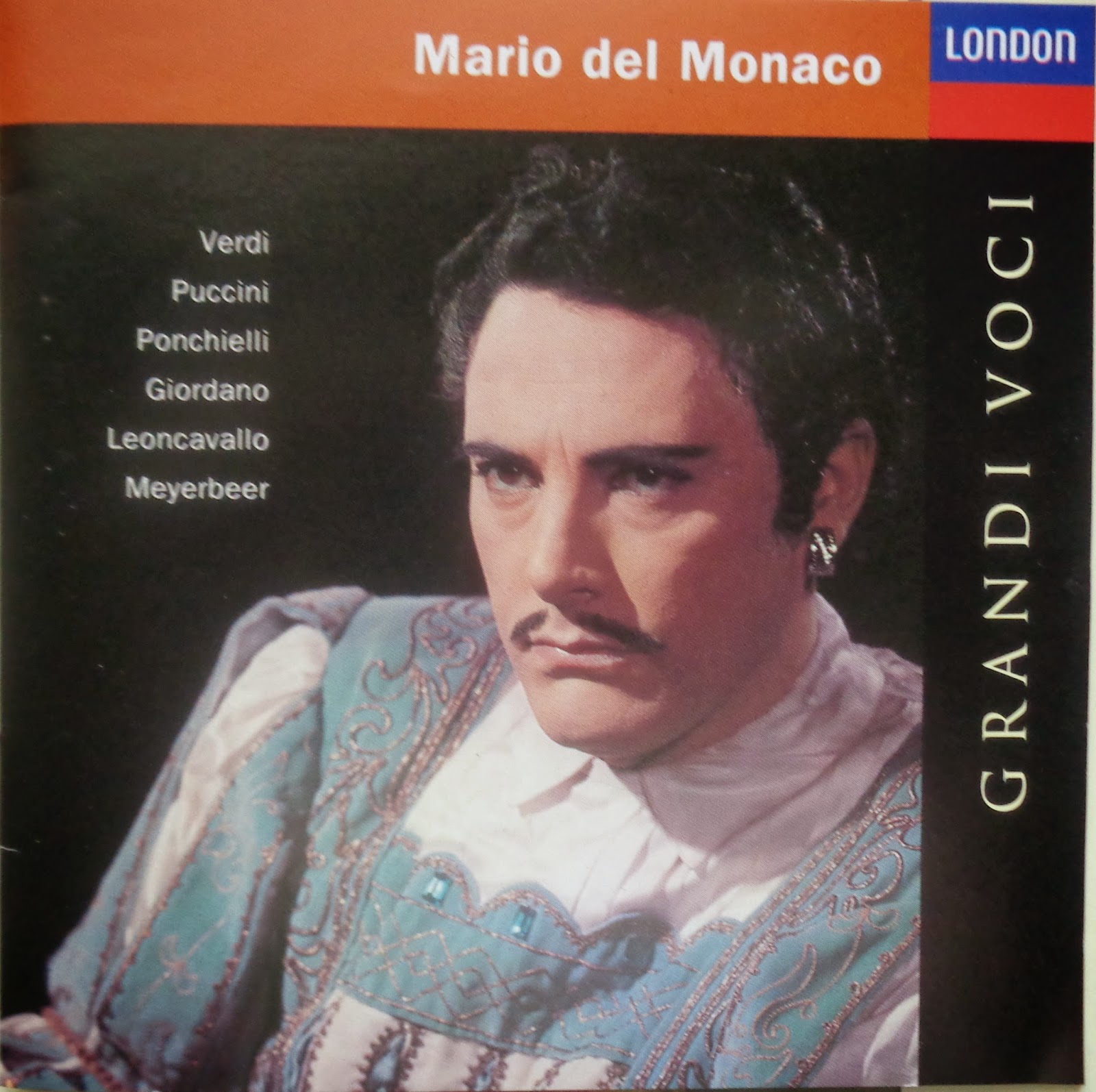 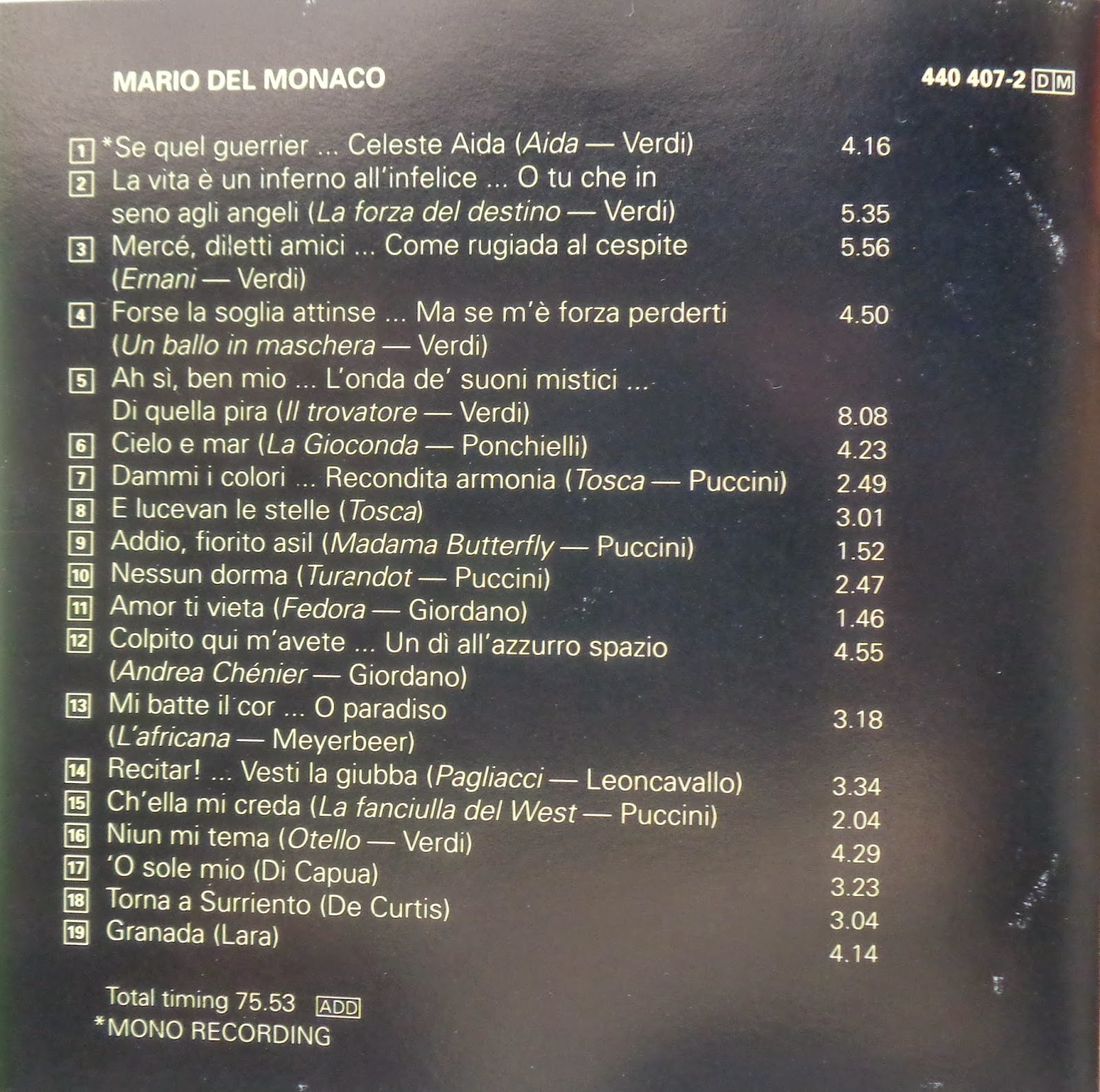 This is old but gold. On that CD, released back in 1993 but still available, there are 19 magnificent studio recordings from Mario del Monaco’s absolute prime. And yes, he is at his best. I know, I know! I contradict myself. I constantly repeat that for Mario’s best you have to go for his live recordings. Listening to that disc, I’m not so sure anymore. These performances may be slightly less elemental than their “live” counterparts, but there is elegance and refinement that are sometimes lost in the heat of the stage.

Besides, the sound quality is distinctly superior. All selections on that disc, including the single mono example, boast the sumptuous sonics that have become Decca’s trademark. No “live” recording from the 1950s has depth, clarity and naturalness even remotely comparable to the studio efforts of the legendary British label from the same time. Now let’s listen to some music. 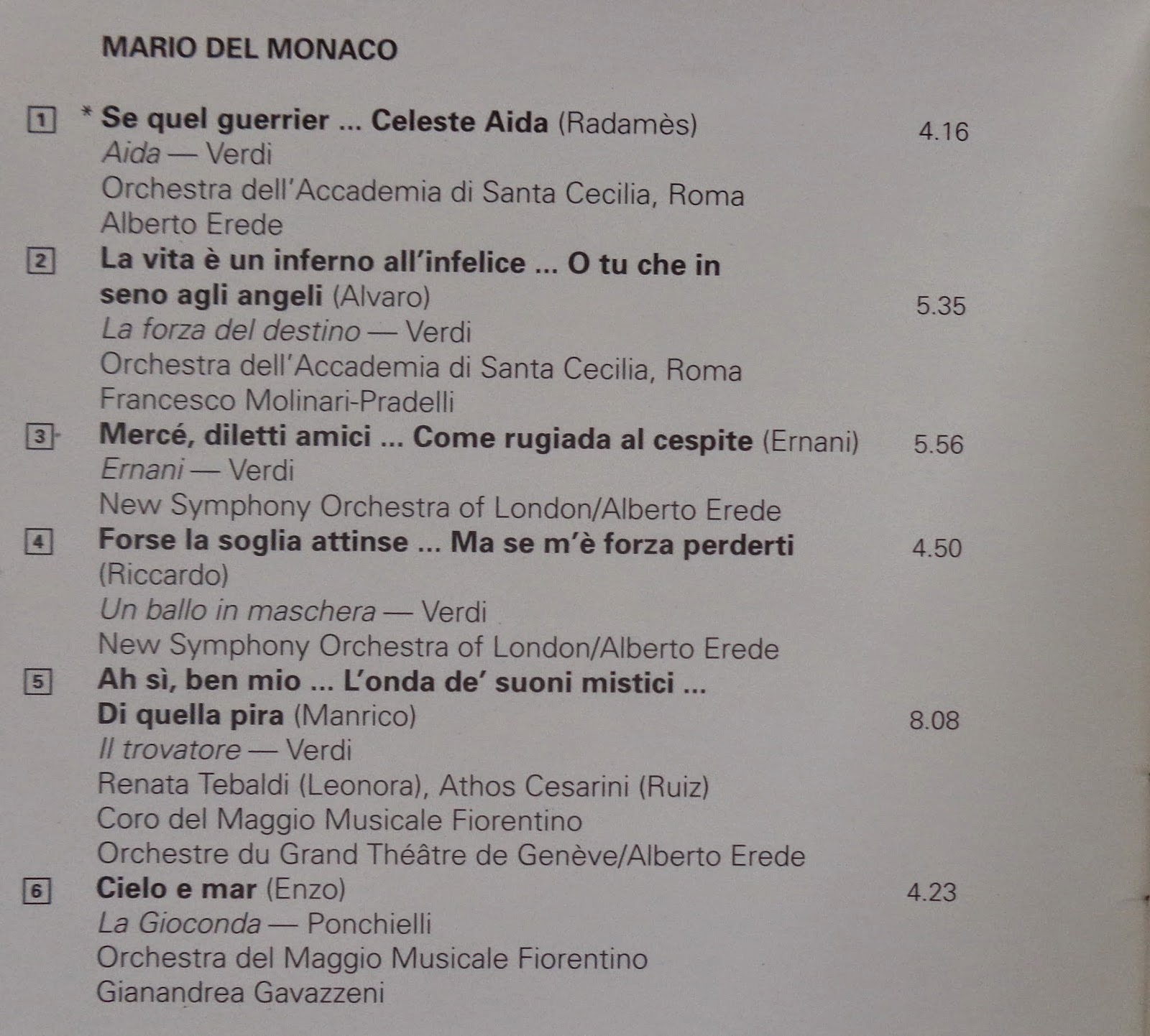 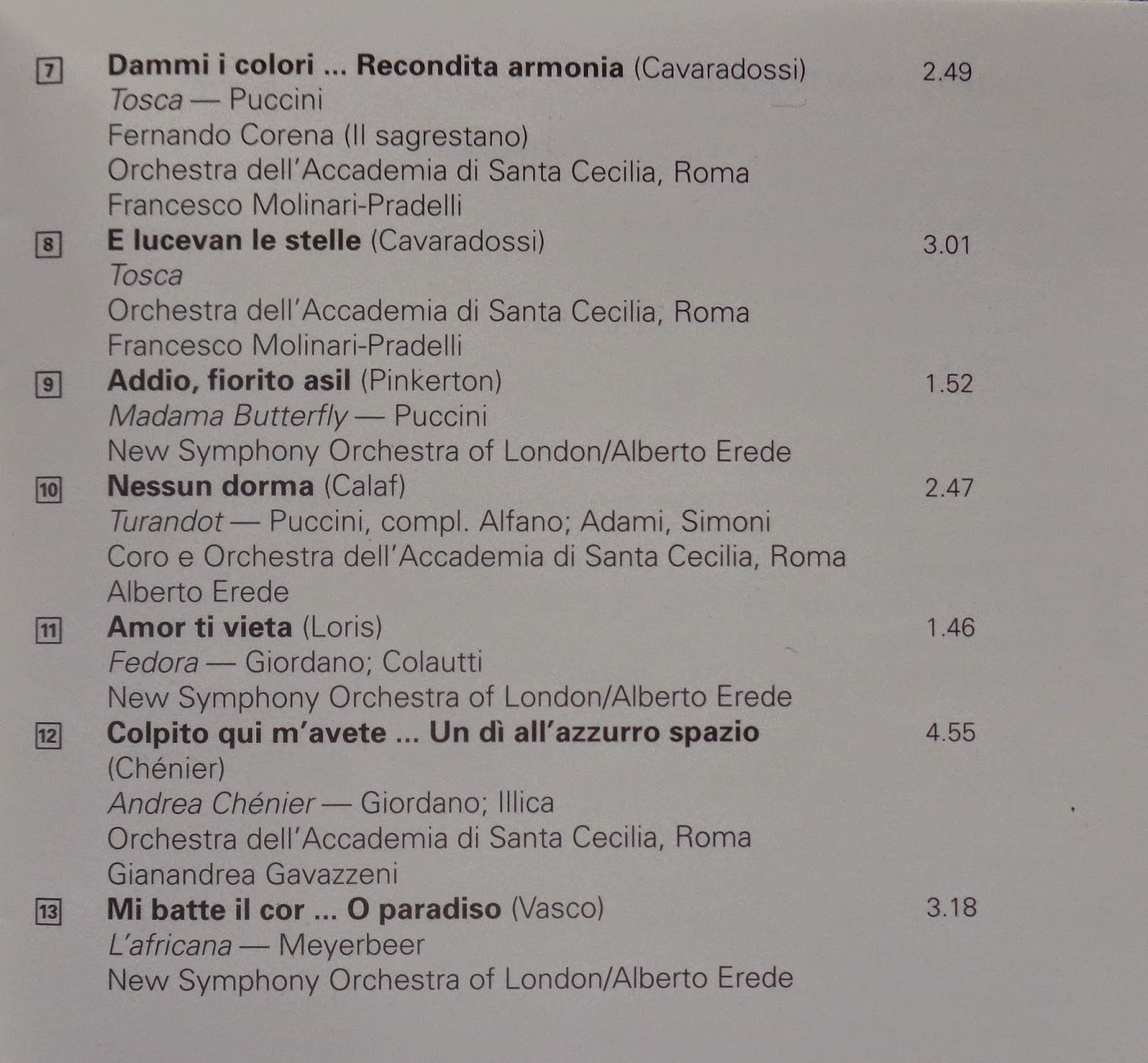 The beautiful thing about this disc is that 11 of the 16 arias on it are extracted from complete recordings. These are all gems, not easy to obtain separately. For my part, Del Monaco owns the roles of Otello, Canio and Cheniér. The Moor’s death (16), Canio’s anguished reflections (14) and Cheniér’s famous “Improviso” (12) have never received more impassioned renditions. The only possible exceptions, of course, are Mario’s countless live recordings. He may not own Cavaradossi (7-8), Calaf (10), Alvaro (2), Manrico (5), Radames (1), Enzo (6) or Dick Johnson (15), but he is certainly a top contender. Alvaro’s poignant monologue is not quite as fine as Mario’s stupendous live rendition with Mitropoulos (, 1953), but neither is it much inferior.

Manrico’s aria and cabaletta, here nicely given with the intervening short duet and Ruiz’s intrusion, is Mario’s best version; only one other complete recording of the part has survived, the 1957 radio performance that was used as a soundtrack, but this is less accomplished. Note his robust yet graceful phrasing in “Ah si, ben mio”, and the thrilling trills, the perfect pace and the stunning, yet devoid of ostentation, finale of “Di quella pira”. For once in this “cabaletta to end all cabalettas” (Charles Osborne), I have a feeling I’m listening to a character anxious to save his mother from the stake, not to a male prima donna whose only purpose is to split the roof with the final note.

In his charming memoirs, La mia vita e i miei successi (1982), Mario remembered the Decca recording sessions with some distaste. Most of them, he says, were made in the stifling halls of Academia di Santa Cecilia during the hot summer months. He was amused by the contrast between the operatic artist in gorgeous costumes and the recording artist in sweaty t-shirts. As you can see above, eight of the complete studio recordings – that is, all of them except Il Trovatore and La Gioconda – were made with the orchestra of Santa Cecilia and, presumably, under the unpleasant conditions described by Mario. None of them, however, shows any sign of fatigue or discomfort.

Unfortunately, Mario never made a commercial recording of Ernani, though there are at least six live recordings in existence; one of these with Mitropoulos (, 1957) has become truly legendary. This 1956 studio take on Ernani’s recitative, cavatina and cabaletta (“O tu che l’alma adora”, not mentioned in the booklet but it’s there, trust me) is no slouch either. Live performance from 1946 is the only complete recording of Mario’s singing Riccardo that we have. The recitative and aria included here are ten years younger. “Forse la scoglia attinse” is among the finest opportunities (together with “Se quel guerrier io fossi”, “La vita e un inferno all’infelice” and so many others) to appreciate Mario’s versatile and always dramatically relevant declamation in Italian, while the aria, “Ma se m’è forza perderti”, shows him at his lyrical best. The same is true of the beautifully executed “Amor ti vieta” from the same sessions. (It must have been some LP, this one with Alberto Erede recorded in 1956.) Mario loved the role of Loris Ipanov in Giordano’s Fedora, but he came to record it commercially only in the end of his career (1969). The voice is considerably fresher 13 years earlier. Finally, Vasco da Gama’s “Paradiso” from Meyerbeer’s L’Africana survives the hardest test. Mario makes perfectly mediocre music sound like masterpiece. It takes genius to achieve that.

(Having mentioned the lyric repertoire, one can lament the omission of some of Mario’s best work in the field. Rodolfo from Puccini’s La Boheme was hardly his best role, so it is no wonder that Decca partnered Tebaldi with Bergonzi for the 1959 studio recording. But Mario did sing the role on the stage early in his career (1943-50) and in 1954 he made a wonderful recording of “Che gelida manina”. But with total timing of 75:53 it seems churlish, if not stupid, to complain about omissions.) 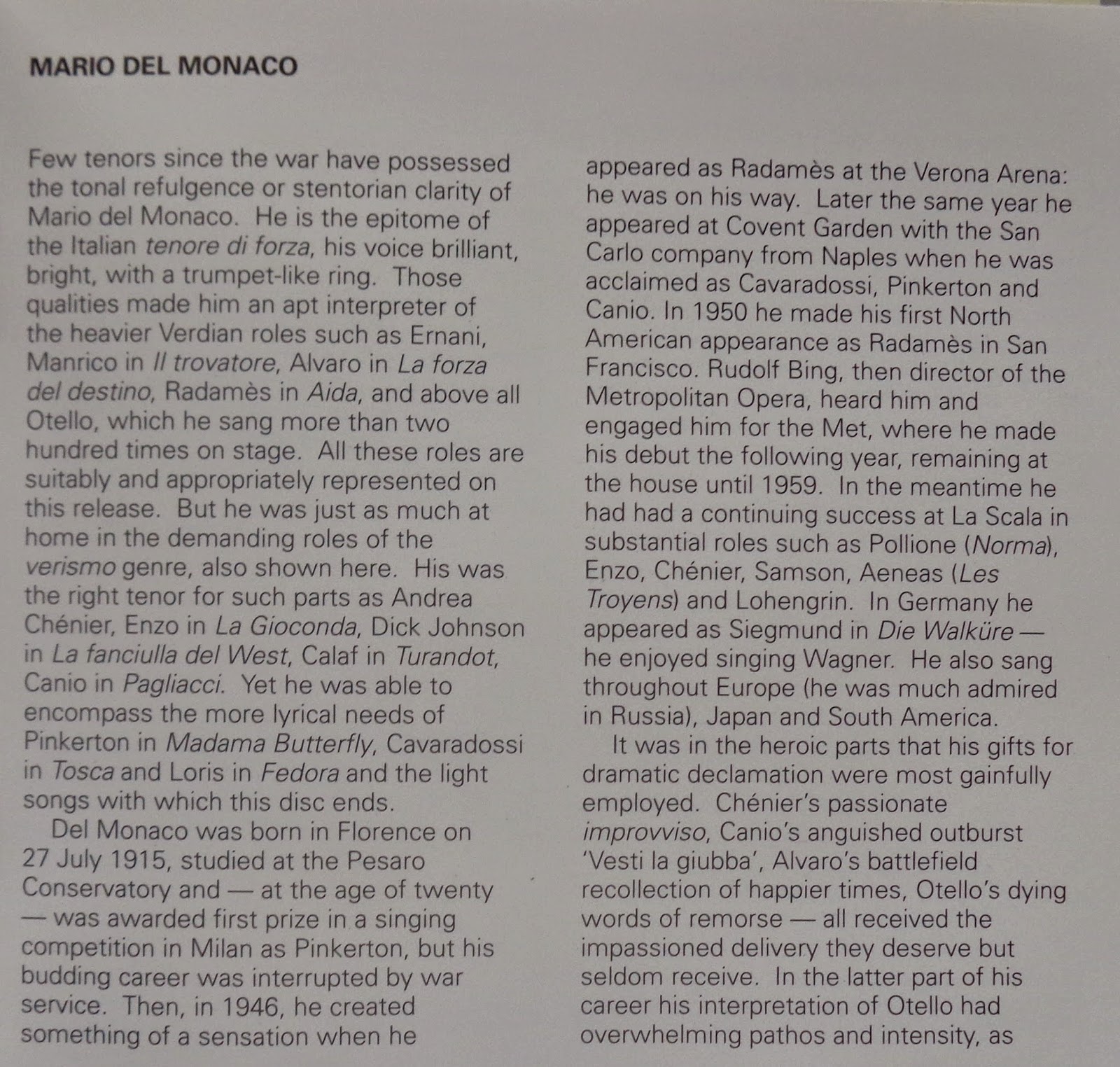 The liner notes by Alan Blyth are not much unlike the essay he supplied on the next year for the Testament release of Mario’s early recordings for HMV. It is very pleasant to see the most notorious feature of Mario’s singing defended by such an “authority”:

Del Monaco was often accused, both on stage and on his many recordings for DECCA (with whom he sang exclusively for the major part of his career), of singing at a relentless forte. That is not borne out by close scrutiny of his singing here. For instance, in the recitative before Riccardo’s last-act aria in Un ballo in maschera, the tone is often subtly shaded, and the aria itself is delivered with sensitivity as regards line and phrasing. He also scrupulously avoids the lachrymose effects that mar the singing of so many Italian tenors. Inevitably with a singer of his weight of voice, the softer grain of a lighter tenor is not always in evidence simply because it is impossible for a dramatic tenor to refine his tone in that manner.

As I have already made clear, I agree about Riccardo’s recitative and aria. Mr Blyth’s example is a fine one, but it is by far not the only one. It’s high time to demolish once and for all the myth about Del Monaco’s “relentless forte”. Certainly, his piano was nothing like Di Stefano’s or Bergonzi’s, but then again neither was their forte anything like his. Furthermore, many people seem to associate lack of subtlety (that word!) with lack of dynamic contrasts. This is a very superficial point of view. Subtlety – whatever that means – must be achievable by other methods as well, for example rhythmic variations and accentuated diction. Mario excelled at these, though he was by no means as dynamically monotonous as many connoisseurs would have you believe.

The 19 tracks on this disc are full of examples. “Vesti la giubba” and “E lucevan le stelle” are “subtly shaded” and “delivered with sensitivity as regards line and phrasing”, are they not? Just hear the beginning of the former and “o dolci baci, o languide carezze” in the latter. What about the beginning of “O tu che seno agli angeli”? Isn’t this a beautifully produced piano? “Celeste Aida”, “Come rugiada al cespite”, “Cielo e mar” and “Amor ti vieta” are more robust than most other recordings. But are they sung with “relentless forte” or without subtlety? I don’t think they are. “Niun mi tema”, Othello’s death, taken by the way from the 1954 recording with Erede and not from the comparatively mild remake with Karajan (1961), is anything but insensitive to the text. In fact, there is not a single aria on this disc that displays the vices that Mario del Monaco is supposed to have according to his detractors.

I am obviously a great fan of Mario del Monaco. But I do not subscribe to the “unconditional admiration” demanded of this otherwise wonderful site. Hero worship is not my cup of tea. Nobody is or ever was perfect, and Mario certainly isn’t and wasn’t the sole exception in human history. Occasionally, “live” and not only, his passion got the better of him. Then his phrasing and even his normally impeccable diction suffered. Very occasionally, he could and did produce very ugly stuff indeed! The only examples for something like that on here are “Torna a Surriento” and “O sole mio”. The refrains come off rather well, with Mario attacking the high notes in his typically ferocious and compelling way, but the rest is much less admirable. It sounds as if he tried deliberately to scale down his voice and sound more lyrical. But going against your nature seldom leads to worthwhile results, and this is certainly not the case here. Mario recorded a good deal of Italian songs, not to mention excerpts from musicals, operettas and church works, but he was seldom as convincing in this repertoire as he was in opera.
“” redeems the faults of its Italian companions. This is the perfect conclusion of the disc. I don’t need any other recording of this lovely Spanish song. I used to like Placido Domingo a lot, but that was before I heard Mario del Monaco. This is some of the greatest singing on record – ever. Mario has everything: ringing top notes, solid low ones, perfect diction, dynamic variety, marvellous ability to keep the lilting rhythm and sustain the melodic line. Placido, and everybody else, has fallen into complete oblivion. Hear why.

Random selections with arias performed by Mario del Monaco are legion on the market. This is one of the best. It can easily stand comparison with any other collection, live or studio. The only drawback of this one is that the sound is not well equalized, and this has nothing to do with the voice; some arias (those from Tosca, for instance) just sound too quiet compared to the rest. Never mind a quibble like that. If you want to know why Mario del Monaco was one of the greatest operatic superstars of the 1950s, get this disc and you will know. Somerset Maugham once wrote that every writer has the right to be judged by his best. I don’t see why this rule should not apply to tenors as well. Whoever compiled that disc evidently agreed with me.