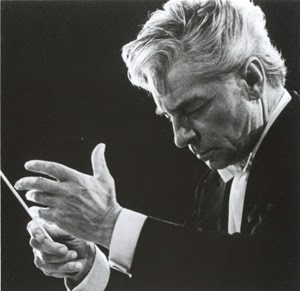 Tchaikovsky’s Fourth, Fifth and Sixth symphonies, so different from one another yet so unmistakably Tchaikovskian, were cornerstones of Karajan’s career every bit as important as the symphonies of Beethoven or Brahms. They entered his symphonic repertoire before WWII and stayed there for some half a century or so. He recorded them commercially at least four times. Three of these sets, in fine recent remasters, are conveniently available as twofers. 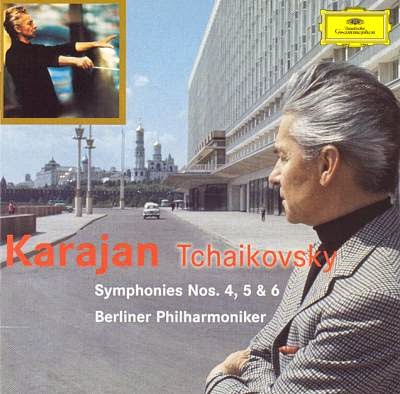 These are fine performances, now available in better-than-ever-before sound. All the same, they are of mostly historical interest. Both of the next two sets have, in their different ways, vastly superior sound. This one tends to be a little muddy (woodwinds, timpani) or harsh (brass, cymbals), pitfalls of Jesus-Christus-Kirche as a recording venue which Günter Hermanns, Karajan’s Tonmeister for DG, didn’t always avoid. (Neither did Wolfgang Gülich on EMI, for that matter.) And the sound does matter – unless you still believe the old hokum about Tchaikovsky’s amateurish orchestration. Karajan’s interpretations didn’t change much over the years, but they did become more refined and better nuanced. It was all “smoothing the edges” more – according to the Karajan detractors who claim that he never made another fine recording after those DECCA sessions with the VPO in 1959-60. But that’s another story.

The Sixth is notable for the relatively slow, Karajan-wise, climax in the first movement. Also, it is the best recorded of the bunch, although it was actually recorded first (1964). The Fifth is given a very dramatic reading. I don’t know how Richard Osborne decided it is “the most gracious and urbane” of all recordings of this symphony made by Karajan. Then again, Mr Osborne is no stranger to writing nonsense in his liner notes. Again according to him, the Fifth is “less troubled (and less original)” than the other two. Ha! You bet!

On the whole, this twofer is a very good place to start. All the same, for the real thing we have to enter the 1970s. 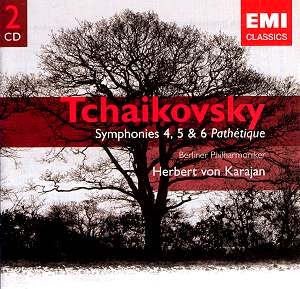 If you are used to the DG sound, this one will come as a shock. Don’t worry. Stay calm. Keep listening. Things will normalise again. Trust me, I know. I’ve been through it.

I don’t know about early editions, but the 2007 remaster boasts incredible sound: spacious, deep, natural. The strings are unbelievable! So many details for which you have to listen carefully on DG here leap to your attention. Unlike some other EMI recordings from the 1970s, the woodwinds are not distant, nor the timpani overblown. My only quibble is that the brass is not clear enough in the grand climaxes. But you can’t win them all.

Sound apart, these are leaner, more athletic performances than the ones on DG. There is a sense of abandon that’s almost apocalyptic. I use the word in its literal sense. The Berliners plays as if the End of the World is coming and there is no tomorrow. All three symphonies are superbly performed, but the Sixth is special. It may be the best Karajan ever did. I do not agree, and never will, with his rather fast take of the climax in the first movement, but here, for once, it sounds almost right. The prominent strings work miracles. The Scherzo sounds totally different, the Waltz is spookier than ever, and the finale will displace your furniture. I guarantee. Just listen to the low strings after the first climax. All in all, stupendous performance in stupendous sound! 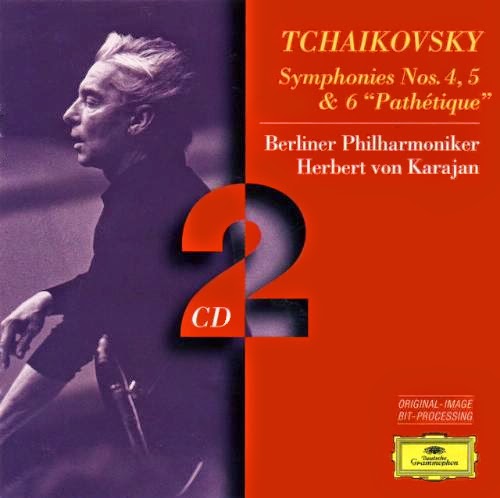 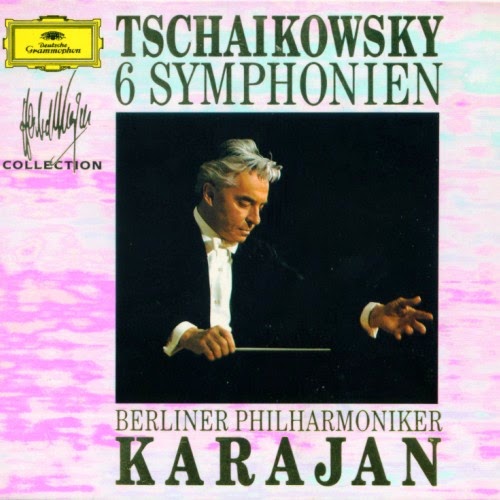 This is, on the whole, my favourite set. The sound was already superb on the old box-set edition (4 CDs, 6 symphonies, 1975-79) and, fortunately, the remastering didn’t change that. Compared to EMI, the strings here remind one of a chamber orchestra; but the tone is rich and deep. The sound is brighter – some would say brittle – and that is not to everybody’s taste, but I have no problems with it. The dynamic range in general and the brass in particular are totally superior to EMI: the climaxes are magnificent yet clear. Just listen to the three cataclysmic chords in the end of the Fourth’s first movement, while the main theme wails high in the violins, and the following sound hurricane. Swept you out together with the armchair you were sitting in, didn’t it? The Fourth, indeed, is a standout. Karajan surpassed himself. None of his other five studio attempts comes close. The Fifth is rather different than the EMI version, but it stands well to comparison. The Sixth on EMI is unsurpassed, but this one is no slouch either. 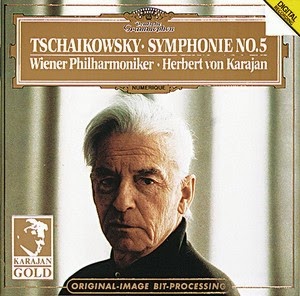 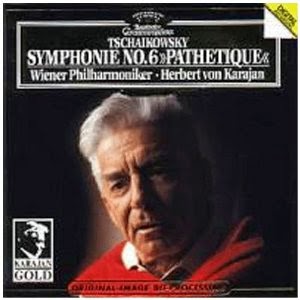 This is the most disappointing “set”. Only the Fourth (Karajan’s forte) reminds, from time to time, of his finest Tchaikovsky. The climaxes in the Fifth and the Sixth are strangely tepid. They give the impression of routine drudgery made for the sake of the digital catalogue. This is worthy neither of Karajan nor of the VPO. The sound is, of course, crystal clear and very detailed, but awfully flat and with somewhat limited dynamic range. The balance is rather off: trumpets far too prominent, horns and trombones quite the opposite. The strings are dreadfully thin and weak! Surely the string section of the VPO can do better than that! 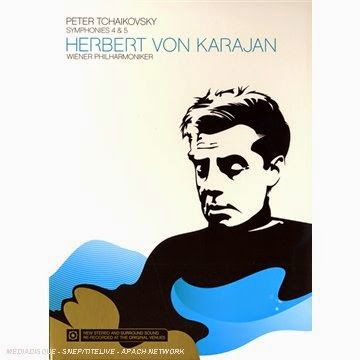 The best about these performances is that they were captured on video and released on DVD. They are much better seen than listened to; the camera is often revealing about some less obvious details of the orchestration. And they make for an interesting comparison with the younger and considerably more vigorous Karajan from the “bonus track”. If you are a Tchaikovsky or a Karajan aficionado, you probably won’t regret the purchase. Then again, you just might. The bad news is that the sound on the SONY DVDs, especially the 2007 editions “re-recorded at the original venues” (what for!?), is even more dreadful than the one on the DG CDs. The dynamic range is flattened to death! And the balance is by no means improved. Judging by the Fourth symphony alone, the problem with the balance was already there in the early SONY DVD (2000), but the limited dynamic range is largely a result of the re-recording procedure. Get the VHS from the 1980s if you can. They are probably superior to both DVD releases.

Coming from the years between the EMI and the DG sets, these live performances are rather disappointing, at least by Karajan’s somewhat exalted standards. Neither the sound nor the performance lives up to the studio recordings. To be sure, they are hugely preferable to the videos with the VPO. But that doesn’t say much, does it?

(To be exact, there is one "set" more, with Philharmonia for EMI (1953-56), as well as isolated recordings of separate symphonies (Fourth for EMI with BPO from 1960, Sixth with BPO for DG from 1939 and with VPO for EMI from 1949), but these are of interest only to fanatical Karajan collectors who want to trace his development.)

Karajan’s Tchaikovsky may not be idiomatic enough for the connoisseurs, but for me great music transcends national borders (at least the ones between and the West). I love Mravinsky’s grand vision, Rozhdestvensky’s devastating passion, Gergiev’s scary intensity (especially in the Pathetique) and even Svetlanov’s rushed brilliance, yet if I have to choose but one set, I have no doubt which one it will be. As a total experience, for me, Karajan from the 1970s tops them all with a vengeance. Whether one prefers the EMI or the DG sound is a matter of taste. I, for one, would love to combine the EMI strings with the rest from DG. But, like I said, you can’t win them all. Therefore, I wouldn’t want to be without either set. The other two sets are of limited historical (1960s) or visual (1980s) interest.
Posted by Alexander at 21:26