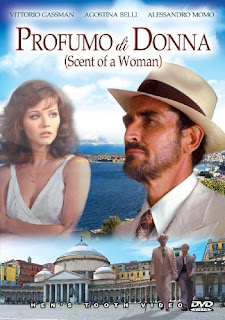 Unless you want to prove that you have seen neither – or that you are entirely devoid of mental resources.

In addition to the title, only the very broad outlines are vaguely similar in both movies. Themes like loneliness, disillusionment and friendship are certainly complex enough, and important enough, to merit completely different treatments. The script, the characters, the cinematography, everything is indeed so different in both movies that to compare them is the highest form of stupidity.


That settled, let's see how Profumo di Donna stands on its own. Well, it does stupendously well. Dino Risi is a fine director, with a flair for drama and a good deal of knowledge how to make the best out of each scene. The supporting cast is as unknown as it is excellent. The 17-years-old Alessandro Momo, who tragically died in a motorcycle accident just six days before his 18th birthday (and shortly after the completion of this movie), is terrific as the young chap who escorts the crusty old man, and the achingly beautiful Agostina Belli is certainly much more than mere adornment.

But the main reason for the overwhelming impact of this movie is Vittorio Gassman's stunning performance as the blind, bitter, blunt, bluff and boisterous captain who has to conquer his demons. This is subtle yet powerful acting, atmospheric and almost otherworldly in its depiction of changing moods. With a single expression of his face, Gassman can – and often does! – say more than many modern and famous actors have said with their complete careers so far. Fabulous acting. It will reward re-watching.

My only two minor complaints about this movie is that the dialogue is sometimes a little too clipped and fragmented (or so it looks judging by the subtitles) and that the visual side is occasionally a little drab. Neither "defect" is worth making any fuss about.

For those who admire Vittorio Gassman's presence on the screen, this is of course an obligatory movie; they probably have seen it already anyway. But I venture to suggest it is a must-see for everybody interested in cinema as a form of art with an important message. Surely Fausto, Gassman's mercurial character, is not the only human being who has to accept, at one time or another during his life, that he is "not a lion", that he is not fearless.

PS Vittorio Gassman's stupendous performance here shouldn't come as a surprise to anybody who takes the trouble to do a little Web research. At least in Italy and in addition to half a century on the screen, he was a famous stage actor as well, with a long and distinguished career that encompassed parts from Shakespeare's Othello to Stanley Kowalski in A Streetcar Named Desire.
Posted by Alexander at 11:35