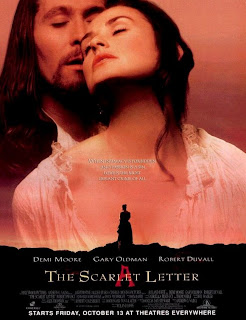 This movie has been harshly criticized by shallow book lovers who just can't stand the fact that, save the names of the main characters and the basic elements of the plot, it has nothing to do with the novel. True. So what? A movie, too, is supposed to be a work of art, and art must have nothing to do with copying. If you want a movie that follows the book closely, then just read the book* and make the movie inside your head. Every great book can stand such treatment pretty well, and every true book lover – not mindless bookworm who reads for reading's sake – has quite enough imagination for that.

The same inane criticism of the “nothing to do with the book” type has been levelled against Troy (2004), The Count of Monte Cristo (2002) and many other movies “based on”, “adapted from” or simply “inspired by” famous literature. Nobody seems to ask one very sensible question. Why should the movie have anything to do with the book? The mediums are completely different; they may be expected to produce different results. Indeed, they should. Besides, just as prose quality itself is no guarantee of literary greatness, so the fact that a movie is “freely adapted” from a book is no license to pour invective on it. Like any other such movie, The Scarlet Letter must stand or fall as an independent work of art. For my part, it stands magnificently, for it is the best type of “adaptation”: one that uses the original only as an inspiration.

(A fascinating parallel with the worlds of theatre and opera can be drawn here. Most opera libretti are derived from plays which are ruthlessly cut and reshaped to suit an entirely different medium. Have you ever heard anybody degrading Le Nozze di Figaro simply because its libretto is a greatly simplified and weakened version of Beaumarchais’ original? Of course not. What about Rigoletto and Le roi s’amuse? The same deal. Why? Because whatever literary value has been lost in the art of adaptation, for it is an art, an ample compensation has been gained thanks to great music. It’s exactly the same with the visual side, and not only, of movie adaptations.)

I am here to tell you that The Scarlet Letter is a wonderful movie, and that this “5,3” on IMDB is tosh. If you expect, nay if you insist on, literal adaptation of the book, you needn’t waste your time with this movie. If you are just a little more open-minded, it’s a must-see. I am the walking and the writing proof that one can appreciate both works. The movie was my whole stimulus to read the book, and that has been a remarkably and unexpectedly powerful experience. But the film remains none the less great for that.


Both the story and the characters are changed more or less beyond recognition in the screenplay, but none of these changes, so far as I can see, has any detrimental effect. Rather to the contrary! The screenplay is actually more dramatic, with several tremendously effective scenes and hauntingly powerful lines which are entirely new. Observe Hester’s receiving the scarlet letter in front of the multitude with the words “Put it on, for it is not a badge of my sin but your own”, or Reverend Dimmesdale’s stirring speech when he, again in front of the crowd, confesses that he loves that woman, that he is the father of her child, that in God’s eyes he is her husband, and that “If you must hang somebody, to appease your anger, and your fear, then hang me!” – to name but two examples. And who can forget the last words of Pearl, whose voice kind of tells the story: “Who is to say what is a sin in God’s eyes?” Who indeed?

Even more fascinating is the change in the characters. Here again, if anything, the screenplay has improved upon Hawthorne’s original. Hester in the book remains convinced that she has committed a dreadful sin, that God will punish her, that her Pearl, perhaps, is something of a witch. But Hester in the movie is to my mind a more inspiring, affecting and likable personality. She defies her elders with a vengeance: “I believe I have sinned in your eyes. But who is to say if God shares your views?” She loves and honours the father of her “sinful” child and she completely refuses to believe that what happened between her and Dimmesdale has anything to do with sin. The conflict in the movie, as should be expected, is more explicit, unlike the largely psychological struggle in the novel, but if not an improvement, this is certainly not a defect either.

Ditto Dimmesdale. The passionate and intense creature in the movie is a vastly different character than the rather weak and pathetic creature in the book who excites that singular mixture of affection and exasperation. Now, Arthur on the screen is a man torn asunder by doubt, too. Did he sin? Did he become “a pollution” and “a lie” in God’s eyes? Or in his own? But finally, after a most dramatic fight between different aspects of his personality, the man wins over the pastor completely. If anything, again, the struggle and the victory are more realistic and more compelling in the movie than in the novel.

Hester’s lawful – and awful – husband is the only one whose incarnations on the page and the screen share some similarity: he is equally detestable in both places. That said, his portrayal in the movie is, of course, less subtle than the one in the novel, but this is compensated with additional brutality.

All in all, all three of the main characters, in addition to being vastly different, are by necessity simplified for the screen. Yet none of them, with the possible exception of the chilling Roger Chillingworth (aka Roger Prynne), is one-dimensional or dull.


The script is greatly helped by the superb cast. The alluring and passionate Demi Moore as Hester, the long-haired and handsome Gary Oldman as Dimmesdale, and the sinister and scary Robert Duvall as Roger all give splendidly intense and vivid performances. The supporting cast is excellent and so are the director’s work and the sets. On the whole, the movie is much more of a love story than the novel, but it never degenerates into mere melodrama. If anything, the puritanical forefathers are rather more harshly condemned, their moral weakness and their odious duplicity are mercilessly exposed, something Hawthorne’s rather feeble satire fails to do. Also, of course, the sensual elements are far more explicit on the screen, but they always remain in perfect taste. The conclusion is rather happier than the one in the novel, but I see no reason to hold this against the value of the movie, either.

One last point. The music is superb, too. Composed and conducted by John Barry, the soundtrack is available on CD and cannot be recommended highly enough to all lovers of gorgeous orchestral sound. Note particularly the music for the love scene, which in itself must be one of the most stunningly beautiful ever shot. It has a truly puritanical restraint, yet it manages to be really steamy. In combination with strings as intense as anything Sibelius ever composed, and as sensual as anything Wagner created in Tristan, this love scene is a truly wonderful and unforgettable experience.

*I have borrowed this remark from an interview with the slightly crazy Jay Wolpert, the man who wrote the equally notorious in the category “nothing-to-do-with-the-book” screenplay of The Count of Monte Cristo (2002), the one with the outstanding Jim Caviezel in the title role. Mr Wolpert’s answer to those who criticized him for not keeping close to Dumas’ original cannot be bettered: “Thank you. My job was not to stay close to the book”. Dead right! Mr Wolpert is also amusing on his introduction of Albert as a son of Monte Cristo: “I have never understood why Dumas didn’t use that.” In other words, if you can improve the original, don’t hesitate to do so. There is no such thing as a perfect classic, no matter how ancient and revered.