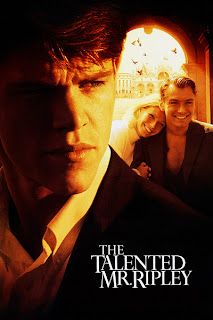 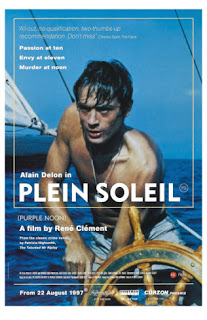 For those who wonder about the first movie, this is the original title of Purple Noon, starring Alain Delon as Tom Ripley, directed by René Clément, and released a good many years ago – just a few years after novel itself, in fact. The other version is, of course, the one directed by Anthony Minghella, starring Matt Damon in the title role.

Broadly and very roughly speaking, strange as this may sound, it seems to me that Anthony Minghella’s version is slightly closer to the book in terms of minor plot details, whereas René Clément’s adaptation is much truer in terms of characters. But this is surely an oversimplification, for both movies could hardly have been more different; apart from the names of the main characters, I think all scenes they share are the two murders and Tom’s having fun with Dickie’s clothes in his room and in front of his mirror, and even here there are many small differences. Curiously, in both cases the director is also the author of the screenplay, though René Clément is actually a co-screenwriter. This is all for the better. Adaptation of a novel for the screen is largely a matter of personal vision, and so is the final movie. If, then, the director and the screenwriter are the same man, or at least different sides of the same man, we may expect an excellent collaboration between them.


I have to admit that Minghella’s The Talented Mr Ripley has been growing on me. The first time I saw it, a good many years ago, I didn’t like it at all. Later I was swept off my feet by Plein Soleil, and I still think it is the better movie, but now I also have a great deal of admiration for Minghella’s version. I still don’t like Matt Damon’s horse face and I still think he is by way of being miscast, but his performance is not without merit. He has some haunting lines which he delivers in a memorable way:

If I could just go back... if I could rub everything out... starting with myself.

I always thought it'd be better to be a fake somebody than a real nobody.

Don't you just take the past and put it in a room in a basement and lock the door and never go in there? That's what I do. [...] And then you meet someone special and all you want to do is to toss them the key and say; open up, step inside, but you can't, because it's dark, There's demons and if anybody saw how ugly it is. I keep wanting to do that, fling the door open just let light in and clean everything out.

Well, whatever you do, however terrible, however hurtful, it all makes sense, doesn't it, in your head. You never meet anybody that thinks they're a bad person.

Stirring lines. I don’t remember any of them in the novel, so I guess Anthony Minghella should be given credit for them. And not a negligible one, either. His adaptation also has few additional original touches that are delightful. The passion for music – jazz for Dickie, classical for Tom – is ever more convincing than the original painting in the novel. The scene in the opera house is one of the most dramatic and brilliantly done in the whole movie; the excerpt from Tchaikovsky’s Eugene Onegin is beautifully staged, deeply moving and more than relevant. Minghella also makes an excellent use of the rather sketchy in the novel Peter Smith-Kingsley and introduces Meredith who seems to be a completely original character yet fits the action to perfection. So is the episode with Silvana, for that matter.

The fascinating thing about Minghella’s version is that the character of Tom Ripley which Matt Damon has to recreate is vastly different than the one in the novel. He is certainly not the cold-blooded murderer calculating everything with frightening calmness; indeed, the killing of Dickie is almost an accident, a kind of self-defence. This Tom Ripley is more vulnerable and sensitive а creature than the one in Patricia’s book. He manages adroitly the deceiving game and he kills swiftly when he has to, as in the case of Freddie Miles, but he still seems to me a rather pathetic creature more worthy of sympathy than of fear. The only drawback of the character, as far as I am concerned, are the hints about homosexuality. It is very briefly mentioned in the novel and entirely missing from Clément’s version. Rightly so, since the sexual orientation has nothing to do with the most fascinating sides of Tom Ripley’s character.

The endings are hugely different, yet both are in their own way chilling. The Talented Mr Ripley finishes with Murder No. 3, conveyed only by sound, and an ingenious shot showing the transformation of Matt Damon’s profile from brightly lit to pitch dark and then closing a door until the whole screen turns black, certainly a stroke of genius on Minghella’s part. The murderer gets away but I can’t help feeling sorry for him. How long can he go on like this, knowing not who he really is, under the constant danger of arrest, with wrecked nerves and full of paranoid obsessions? Is the price too high for him? Will he get away next time? Is it worth it? Difficult questions, all of them.

By contrast, in the end of Plein Soleil Tom Ripley is caught by the police. This ending has been much disparaged, including by Patricia herself, as unnecessarily changed to satisfy the popular taste that the criminal must be punished and all that sort of thing. I don’t see it that way. To begin with, Rene Clément’s idea how to get Tom caught, not to mention his directing the scene, is nothing short of perfect. Who would have thought that, having apparently won everything, Tom would fall in the hands of the police because of such a tiny detail? The scene of his arrest is carefully prepared but the arrest itself is completely missing, substituted by a lovely picture of beach and sea. The sun is shining brightly but you feel cold inside – and by you I mean of course I.


Now, Tom Ripley in Plein Soleil is Tom Ripley from The Talented Mr Ripley by Patricia Highsmith, only considerably simplified for the screen of course. He doesn’t kill Dickie almost by accident but after serious planning and with stunning audacity. It is not for nothing that the weapon is changed here – it is indeed a weapon, a large knife, instead of the oar used in both the other movie and the book. The performance of Alain Delon, absurdly young and even more absurdly beautiful at the time, is superb at all fronts, infinitely superior to anything Matt Damon is capable of; then again, as mentioned earlier, the latter has quite another fish to fry. But Delon conveys the ruthlessness and the especially the charm of Tom Ripley in a way that may well freeze your blood. Pity, indeed, that his amazing beauty often leads to gross underestimation of his acting skills, which are considerable. Some of the most unforgettable scenes are Tom’s training Dickie’s signature or forging his passport and their conversations on the yacht immediately before the murder. All these plot details are strokes of genius, superbly acted and perceptively directed. Moreover, such nuances add verisimilitude that is missing in Minghella’s adaptation or Patricia’s original. The presumption that Tom and Dickie are so much alike that one can use the passport of the other, even under the scrutiny of a police officer, is a trifle too fanciful to be believed by the demanding reader, or the even more demanding viewer.


The main advantages of Minghella’s movie are the absolutely gorgeous sets, both in San Remo and in Rome (the former is omitted in Clément’s version), and especially the marvellous supporting cast. Gwyneth Paltrow is a fine and suitably vacuous Marge – but not that stupid, after all; the looks she shots Tom when she realises the truth are unforgettable. Jude Law gives a powerful performance as the flippant and gay Dickie Greenleaf, though his character is perhaps a trifle overdone in this respect. Philip Seymour Hoffman as the vulgar and bumptious Freddie Miles, Cate Blanchett as the silly, pretty and mentally unstable Meredith, and Jack Davenport as the handsome, homosexual and charming Peter Smith-Kingsley are all excellent. Interestingly, the last two characters are missing from the other movie (and Meredith is missing from the book, for that matter). The only slight disappointment is James Rebhorn as Dickie’s father and Philip Baker Hall as the detective, the former largely missing from and the latter less important in Clément’s version.

Perhaps the most serious flaw in Minghella’s screenplay (as well as in the book) is indeed the episode with the detective. It is difficult to believe that such a smart guy, who has discovered so much from scratch, should really fail to see and find proof that it was exactly Tom Ripley who killed both Dickie Greenleaf and Freddie Miles (in defence of the book, the detective there strikes Tom as only “moderately bright”, which he apparently is). But the sets are truly incomparable! The glittering glamour, the dolce vita that American expatriates led in Italy from the 1950s, is captured to perfection.


This is what Plein Soleil most painfully lacks: visual glamour. Not only is the San Remo episode skipped, but the sets in Rome and Naples are as drab as anything and the camera work is rather poor most of the time; perhaps one is unwise to expect more from a French movie released in 1960. Those shaking shots during the yacht scenes are vividly realistic, to be sure, but the Roman philandering of Tom and Dickie (here called Philip) is rather amateurishly done. That said, the only real disappointment among the cast is Billy Kearns as Freddie Miles; he is sufficiently arrogant, but not quite as tasteless as this particular Princeton graduate is expected to be. Marie Laforet is an excellent Marge – common and cute – and her quarrel with Philip makes his disappearance later much more plausible; the change of heart that Minghella and Highsmith try to make us believe just does not carry conviction. After Alain Delon’s magnificent performance, my personal Oscar for best actor goes to Maurice Ronet who is an outstanding Philip Greenleaf, way superior to Jude Law and indeed much more suitably presented in the screenplay, not as somebody determined not to go back, but as an eternally vacillating fellow not quite serious enough to make up his own mind, perhaps unconsciously seduced by the easy life in Southern Italy.


The only drawback in Clément’s screenplay is the populist attraction of Tom to Marge. It has the same detrimental effect as the homosexuality in the Minghella’s movie. It is entirely out of character, indeed it detracts from the character, and is rightly never mentioned in the book. Minghella’s version makes only one short and insignificant mention of it (in that great scene when Tom was about to cut Marge’s throat). Apart from that, it would perhaps have been nice if the first part of the movie – until the first murder – had been extended a little bit, especially considering the great performance of Maurice Ronet.

At any rate, the two movies are so vastly different that both are well worth watching. Though they, I suspect, can make the book less compelling than it might otherwise be, Patricia’s novel remains a very enjoyable read. Despite occasional tedium and clumsiness, it has at least two major advantages over either of the movies. It gives greater insight into Tom Ripley’s confused yet fascinating mind, and the plot is a great deal more complicated and suspenseful.