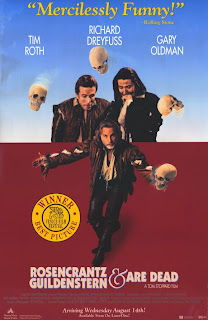 A Gigantic Pile of Pseudo-Intellectual but Genuinely Tedious Junk

Not since Stanley Kubrick’s 2001 have I been so disappointed with a movie. But there is an important difference. Arthur Clarke’s book being one of my greatest favourites, I expected a lot from Kubrick’s movie version. Not so with Tom Stoppard. Thrice have I tried to read his eponymous play, thrice have I failed to complete even half of it. Nevertheless, I had hopes that the screen could rescue what on paper – and most probably on the stage – is painfully dull. In vain.

In case you care, be aware that the following paragraphs contain spoilers.

It is sad to see fine actors like Gary Oldman and Tim Roth wasting their considerable talents with something so inane. The idea to retell Hamlet through the eyes of two of its minor characters is ingenious. But it does require genius to make interesting characters out of nitwits like Rosencrantz and Guildenstern. Tom Stoppard doesn’t have it. Gary and Tim are not to blame. Nobody could pull off decently an opening scene that violates the law of probability itself. Things improve but slightly further on.

It is difficult to find any redeeming qualities in this movie. It is visually very well-done, but nowadays this means no more than the crystal clear sound on a CD; it’s there by default. The plot of Shakespeare’s original is cleverly and rather amusingly interwoven with the adventures of the two schmucks, especially the players foreshadowing the “real” end of the play, but that’s nothing to write home, either. If I understand properly the ending of the movie, there is a charming twist in it.

The only thing that redeems – partly – this mess of a movie is The Player, brilliantly played by Richard Dreyfuss, and his colleagues from the theatre company. Their scenes are the only genuinely funny ones, a godsend amidst the desert of dullness. The words of The Player are virtually the only ones that do make some sense and thus stimulate reflection or a smile:

There's a design at work in all art... events must play themselves out to an aesthetic, moral and logical conclusion. We aim at the point where everyone who is marked for death... dies. Generally speaking, things have gone about as far as they can possibly go when things have got about as bad as they can reasonably get.

We're actors! We're the opposite of people!

We are tragedians, you see? We follow directions. There is no choice involved. The bad end unhappily, the good, unluckily. That is what tragedy means.

But The Player is a supporting character, and so are all of his colleagues. If only Tom Stoppard had made Rosencrantz and Guildenstern smart men of the world like The Player, this would have been a great movie! But he either wouldn’t or couldn’t. Instead, he turned them into infantile creatures as intelligent as your cat, quite incapable of bringing some depth to his concept.

Virtually all scenes with Rosencrantz and Guildenstern are duds. The funny ones are tedious to the extreme, with rapid and clumsy conversation that tells a great deal less than its vivacity may suggest. Indeed, it tells next to nothing. The few poignant moments towards the end fare better but are not enough to justify nearly two hours of acute boredom. Still, occasionally – very occasionally indeed – there is a couple of lines worth noting:

Rosencrantz: Whatever became of the moment when one first knew about death? There must have been one. A moment. In childhood. When it first occurred to you that you don't go on forever. Must have been shattering. Stamped into one's memory. And yet, I can't remember it. It never occured to me at all. We must be born with an intuition of mortality. Before we know the word for it. Before we know that there are words. Out we come, bloodied and squawking, with the knowledge that for all the points of the compass, there’s only one direction. And time is its only measure.

Guildenstern: All your life you live so close to truth it becomes a permanent blur in the corner of your eye. And when something nudges it into outline, it's like being ambushed by a grotesque.

These are fine, stirring, brilliant lines. But they are virtually lost in what, for want of a better word, can only be described as trash. Examples are countless and not really worth quoting. But here are some anyway:

Rosencrantz: Shouldn't we be doing something... constructive?
Guildenstern: What did you have in mind? A short, blunt human pyramid?

Are these supposed to be funny? Hilarious? Perceptive? Profound? You may rest assured that Gary and Tim do their best with every line. But what’s the use when the screenplay is gibberish?

But the worst thing in this movie are the author’s pseudo-intellectual and pretentious aspirations. Stoppard’s blatant attempts to infuse his creation with a serious message under the “comic” surface are simply pathetic. What does it tell us that Rosencrantz rediscovers the steam power or that an apple falling from a tree hits him on the head? Only that not everybody can become James Watt or Isaac Newton. Isn’t that a trifle too obvious? Likewise with his uncomprehending toddling in the footsteps of Galileo or Archimedes. We all know that discovery is a very different thing than description, explanation and invention. The great scientists from the past weren’t just curious and observant fellows; they were a great deal more. They had the right minds to describe certain natural laws, to explain certain hitherto mysterious phenomena, and to put both of them to practical use.

The attempts for discussion of even weightier issues like chance and probability, appearance and reality, life and death, fare even worse. These things have been done so much better before, not least by Shakespeare himself. The numerous discourses on death, such as the one that Rosencrantz delivers while lying on a sarcophagus, are nothing but a vastly inferior and intolerably verbose version of Hamlet’s justly famous “To be or not to be”. The several drawn-out and repetitive conversations between the two morons, or the constant confusion who’s who, that address the elusive relationship between mere labels like names and the essence of personality are something very much like nonsense. Juliet’s “What’s in a name?” is a much more succinct and greatly superior expression of the same conundrum.

To say that I am baffled by the huge amount of praise lavished on this movie would be an understatement. It may be, of course, that I have misunderstood it. Beneath all the verbiage there may be a core of profoundness that I am just too dumb to grasp. I do not think this is the case, but if you wish to adopt the snobbish attitude to the opposite, you have my blessing. The saddest thing is that the idea does have potential, and issues like the ones timidly raised here comedy is generally well-equipped to deal with. In some other hands, it might have spawned a masterpiece. Not in Stoppard’s hands, not as far as I am concerned.