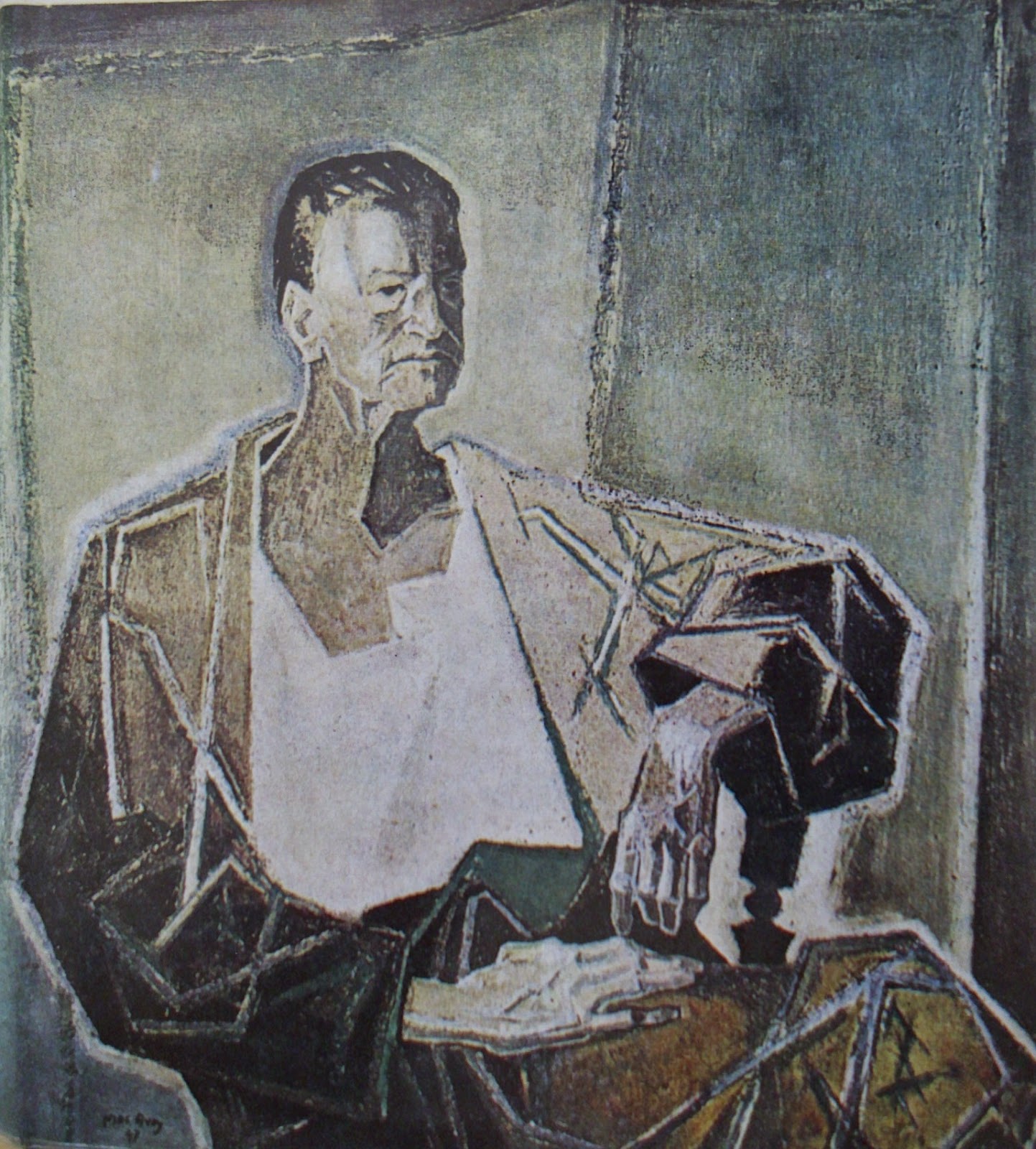 Portrait of Maugham by Edouard MacAvoy.

As the editors of Wikipedia insist on blindly following “reliable sources”, even when these are clearly wrong or at best of questionable quality (or, indeed, misinterpreted), I provide here a compendium of the inaccuracies and the omissions in their List of works by W. Somerset Maugham. I suggest readers who are seriously – I repeat: seriously – interested in Maugham have a look at this post before they trust Wikipedia.

Three works listed as “short story collection” – “Judgment Seat”, “Princess September and the Nightingale” and “The Unconquered” – are in fact single short stories reprinted in pamphlet form. All of them can be found in Maugham’s other books, including all editions of Complete/Collected Short Stories. For more information, see this Bibliography and use Ctrl+F.

Quartet (1948), Trio (1951) and Encore (1952) shouldn’t be on this list, either. They don’t contain enough original material. All short stories are reprints from Maugham’s collections. Of the ten screenplays he may have written only one (“The Verger”). His introductions to the stories themselves are original, but they amount to no more than a few paragraphs.

The entry for The Book Bag (1932) requires special attention, for it is badly messed up. The short story collection published by Ray Long and Richard R. Smith contained 20 short stories all right, but only one of them was by Maugham, “The Book Bag”. This was its first appearance in any form. Note 27, however, leads you to the Library of Congress record about the separate publication of the story by G. Orioli, , some three months later. For more information, see Stott A43. Both works should have been relegated to footnotes.

Stott is an indispensable resource for readers and collectors of Maugham. But he is full of errors, some of them pretty embarrassing, and many of his decisions what to include and where are, to say the least, questionable. To follow him slavishly, without exercising any critical thinking at all, is simply stupid. For more details about errors in his Section A, see here. For a critical examination of his unsatisfactory treatment of Maugham’s all-important prefaces, see here.

This section gives only original titles. It omits all alternative and much better known titles. What is the point of listing so many titles that nobody but a few passionate collectors of old magazines are familiar with – this I don’t profess to know. Nor is there any information about the nature of the piece (short story, essay, serialisation of play or novel) or whether it was collected later in book form. For a comprehensive overview on these “not really encyclopaedic” matters, see this Bibliography and use Ctrl+F. For an update of Stott’s highly dated Section D, from which the Wikipedia list was copied, see here. Only Wiki’s most blatant errors and omissions are listed below.

“Schiffbrüchig” was published in The Venture for 1903 under its English title Marriages are Made in Heaven (Stott D4).

Four pieces – “Pygmalion at Home and Abroad” (1914), “Maltreat the Dead in Fiction" (1930), “Maugham Discusses Drama” (1931) and “Mr Tomkin's [sic] Sitter” (1941) – were not written by Maugham at all. The first two are reviews, the last two are interviews. Stott wrongly lists all of them in Section D, but they all belong to Section G. See The Collection of Norman Moore, Section D.

This list is a mess. In addition to nearly all important collected editions, it also lists a number of random collections with short stories that have no business here (e.g. “Here and There”, “The Sinners”, “Husbands and Wives”, among others). Following the same logic, the list with Maugham’s “collected editions” would swell to enormous proportions. For a much more concise and precise treatment of the subject, see Section F in this Bibliography.

Wisdom of Life: An Anthology of Noble Thoughts, : , 1938, was not edited by Maugham. J. F. Green was the sole editor. This was merely a “New edition, with additions by W. Somerset Maugham and Others” (Stott C22).

Maugham didn’t edit The House with the Green Shutters by George Douglas, either. He merely wrote a preface to it (Stott C23). If contributing in this way is considered editorial work, then this list must include Stott’s complete Section C (63 entries).

The Noble Spaniard is not a play by Maugham. It’s an adaptation of a play by Grenet-Dancourt. Stott incorrectly includes it as A75.

Mademoiselle Zampa is not unpublished. It can be found in A Traveller in Romance (1984), ed. John Whitehead. It first appeared in The Sketch (6 December, 1905) under the title A Rehearsal.

The Summing Up is not, of course, an “autobiography”. France at War does, indeed, deal with “current affairs”, but it’s more accurately described as propaganda. Sources? Just read the books!

Don Fernando (1935) was considerably revised for the 1950 reprint in The Collected Edition. See Stott A49 for details.

Ten Novels and Their Authors (1954) is a little more than “the edition” of Great Novelists and Their Novels (1948). The book was expanded and revised for the 1954 edition. The first American edition of this version appeared in 1955 under the title The Art of Fiction. Stott A69 and B24.

The Writer’s Point of View is not “essays”. It is a single essay, the Ninth Annual Lecture of National Book League given by Maugham in Kingsway Hall on 24.10.1951. Stott A72.

The list omits Purely for My Pleasure (1962), Maugham’s last book published during his lifetime. Stott A78.

For more information, see Sections A. 4. and D in this Bibliography.