Strictly Personal is one of the least known books by Somerset Maugham. If it is mentioned at all, it is usually dismissed as propaganda by people who haven’t read it. What I have to say about the book I have said it elsewhere. The purpose of this post is to shed a little light on the curious differences between the American and the British editions. The major source is Stott’s bibliography (A60). 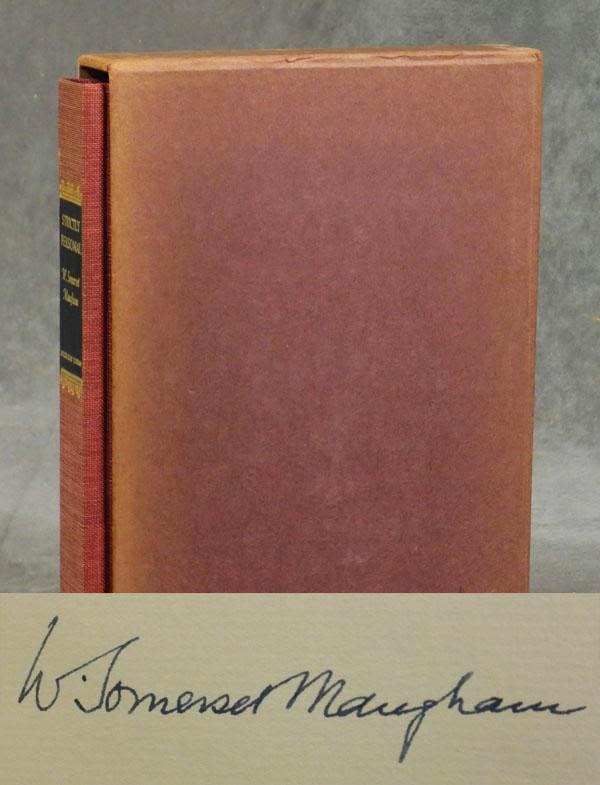 The book was first published by Doubleday, Doran as a Limited edition of 515 signed copies on 3 September 1941 (A60a). Two days later the First Trade edition appeared (A60b). With the obvious exception of Maugham’s signature and the Certificate of Limitation, these editions were identical ([viii]+272 pp.).


The First English edition (vi+198 pp.) was published by William Heinemann nearly six months later, 2 March 1942 (A60d). This is an unusual delay, perhaps due to the war conditions, but more likely due to Maugham’s initial reluctance to publish in a book especially written for the American public.

This remarkable discrepancy was apparently first noted by Robert Calder in his 1978 article “W. Somerset Maugham's Strictly Personal: A Missing Chapter", published in Papers of the Bibliographical Society of America (Bassett, 111). The reason for Heinemann’s mutilation job remains a matter of conjecture. Possibly they feared a libel case, or at least hurt feelings, because of Maugham’s candid portrait of Godfrey Winn (politely called “George Potter” in the book). Godfrey was a mushy and trashy journalist not unlike the one described in the chapter. Worst of all, he regarded Maugham as his mentor.

The rest of the book seems to be identical in both editions. This includes the perplexing last sentence which does look unfinished. Here is the whole last chapter (No. 40 UK, No. 41 US; “half-past” , “half past” US):

I spent a week in . I did a little sight-seeing, but could make no excursions since I had to hoard the few pounds I had. I stepped aboard the clipper one morning at half-past nine. I landed in next day soon after one. I had three dollars in my pocket. I ordered an old-fashioned.

*[Edit: August 2019] An old-fashioned cocktail "consisting principally of whisky, bitters, and sugar, served with ice", OED has been kind enough to enlighten me.

The frontispiece portrait is the same in both editions

The notorious Chapter 15
( edn. only)